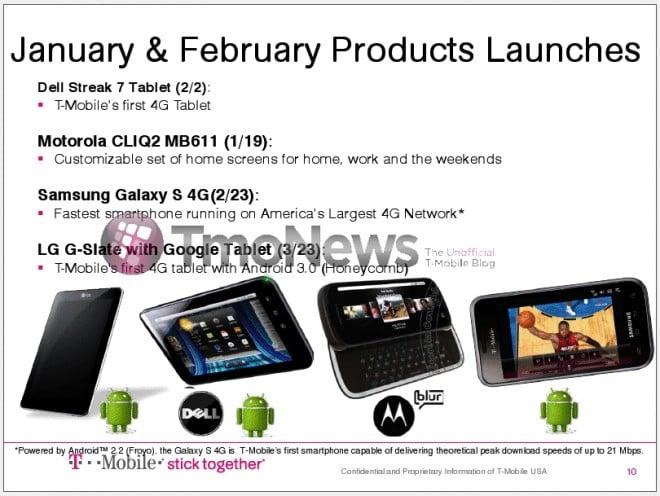 We’re pretty excited bout T-Mobile upcoming lineup of tablets and the Samsung Galaxy S 4G, but we’ve been pretty much in the dark about the availability of these devices. That is, until today. TmoNews got hold of an internal document that shows the release dates of some of these much-anticipated devices, and it looks like we won’t have to wait much longer to see the LG G-Slate, Dell Streak 7, and Samsung Galaxy S 4G go live!

The document gives the T-Mobile LG G-Slate a release date of March 23rd, so we still have about two months to go before this tablet will see the light of day. Still, this is the first Android Honeycomb tablet that supports 4G connectivity right out of the box, so it may be worth the wait. While most of the Android Honeycomb hype is surrounding the Motorola Xoom, I believe that LG has some tricks up their sleeve, and have implemented some great features within the G-Slate. They did say there would be many “firsts” with the Optimus pad, so hopefully that will apply to the G-Slate.

Next up is the Dell Streak 7, the Android 2.2 Froyo-toting tablet that Dell should have come out with in the first place. Sorry, Streak (5). The 7 inch tablet should hit Magenta’s shelves next Wednesday according to the leaked document. The Streak 7 also ships with a NVIDIA Tegra 2 dual-core processor on board, as well as HSPA+ support, so if you feel that you can deal without having the tablet-optimized version of Android on your tablet, and would like the portability of a 7 inch tablet, the Dell Streak 7 may be right up your alley.

While I think Samsung should slow their roll on their new handsets and focus on getting existing devices updated, the Galaxy S 4G is something to be desired. It’s not much more than a 4G Vibrant, but, well, it’s a 4G Vibrant! The Galaxy S 4G should be landing at the carrier on February 23rd, so if you’re aching for this bad boy, you have just a little under a month to wait before it launches.

The Motorola Cliq 2 is also mentioned in the document, but since it’s already been released, there’s little to cover. Still, the handset did launch on the date specified by the document, which bodes well for the rest of the roadmap. On a side note, the mentioned devices show what operating system they use, all of which are running Android. The funny thing is that the Cliq 2 does not show that it’s running Android at all, but Motoblur, as if it is its own operating system. Go figure.

So other you have it, Magenta users. Some hot new devices are on their way, and we don’t have much longer to wait.