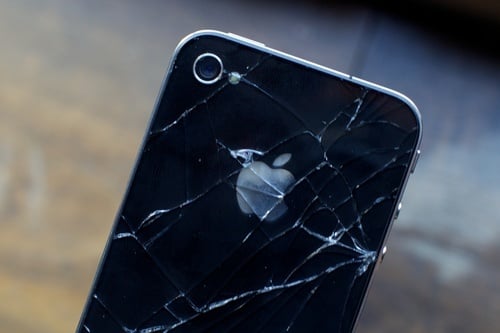 Here we go again. A Los Angeles man named Donald LeBuhn filed a class action lawsuit against Apple because his daughter dropped an iPhone 4 that he paid for and the glass cracked. LeBuhn says Apple’s advertising is misleading and that the iPhone 4’s glass isn’t as strong as claimed. Does someone need to give Mr. LeBuhn a brief primer on the difference between hardness and brittleness?

While some outlets are referring to this incident as the first “Glassgate” lawsuit, let’s not confuse it with the Glassgate issue (or non-issue as it turns out) that popped up a few months ago. The old story said iPhone 4 users were removing slider cases from their phones to find shattered glass because of debris scratching the phone as the cases came on and off. This lawsuit simply illustrates a man who doesn’t know that even the hardest glass will shatter at sharp, sudden impact, and has taken his battle to Apple.

In LeBuhn’s lawsuit, he says:

“Months after selling millions of iPhone 4s, Apple has failed to warn and continues to sell this product with no warning to customers that the glass housing is defective.”

Sure, Apple has said that its glass casing is strong and comparable to sapphire crystal, but even a child knows that glass will break or shatter when dropped from a certain height onto a hard floor. LeBuhn says that his 3GS, which had a plastic casing and glass screen, remained intact when dropped from the same height.

On their quarterly conference call today, Nokia's new CEO, Stephen Elop, mentioned that they must "build, catalyze, and/or join a...