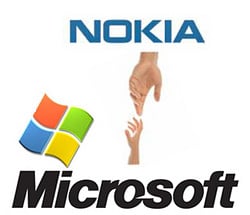 On their quarterly conference call today, Nokia’s new CEO, Stephen Elop, mentioned that they must “build, catalyze, and/or join a competitive ecosystem.” That last bit definitely sounds an awful lot like Nokia’s considering supporting another operating system on top of MeeGo for the upper-range and Symbian for their lower-range handsets, but Elop went on to say a few other things that might dampen such an interesting possibility. Nokia’s new strategy to be unveiled on February 11, will be built on their existing “gems”, and will maintain “sustainable differentiation,” according to the CEO.

Those comments give us something to chew on until MWC, but are still pretty ambiguous and laden with corp-speak. For the sake of discussion, let’s go out on a limb and say they’re going to support another OS. Windows Phone is a reasonable candidate, given Elop’s history with Microsoft, and Nokia’s existing partnership with Office. There have certainly been rumours about Nokia making a Windows Phone for awhile now, but they’ve lacked any real substance, and have been shot down by Nokia employees. Also, such a direction would assume a complete swap-out of operating systems, which I doubt would happen if Elop says they’ll be leveraging what they already have and want to stay differentiated.

I think it would be interesting if they took a similar direction as RIM supposedly is with the PlayBook, by allowing Android apps to run on their own distinct OS. I’m no coder, but MeeGo strikes me as robust enough to handle that sort of thing. A half-way integration like that would allow new Nokia handsets to ride the popularity of Android while still making use of all the software they’ve worked so hard to develop. They might not be quite as cozy with Google as some of the other smartphone manufacturers out there, especially when Vanjoki was in charge and likened using Android to peeing your pants for warmth, but with a new CEO it would be easy to see that attitude change.

It won’t be long until we see exactly where Nokia is going, but hopefully Elop’s comments have set the stage for something big that keeps them from slipping to number 2.