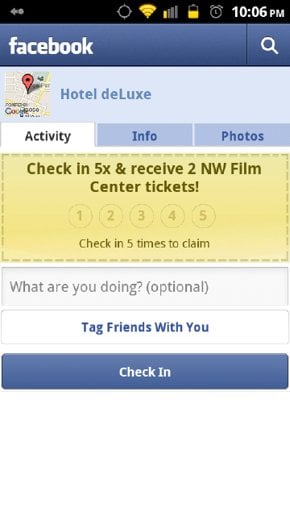 Following up on their December update with chat and push notifications, Facebook is launching a new discount engine for their Android app; now when you use Places to check in and share where you are with your social network, businesses can offer you particular perks. Participating locals have a yellow icon next to them if they do offer anything, so you can spot deals within your vicinity.

Now that the infrastructure is in place, it shouldn’t take long for other Places-enabled Facebook apps on iPhone, Windows Phone, and BlackBerry to catch up. Although Foursquare has been playing in this location-based advertising area for awhile now, Facebook has an extremely far reach, and could make that style of consumer/business interaction a bit more mainstream. Though that’s mostly dependent on smartphone penetration, Facebook has been smart by supporting feature phones; toss a bit of cell tower recognition in there, and even the lowliest of handsets can become location-aware.

Personally, I haven’t found I’m too susceptible to location-based ads; checking-in to locations has been a side effect of me going where I go, not usually the force that steers me there. That being said, I think Google Maps has a better chance of pulling off successful location ads than anyone right now.

In any case, if you’re packing an Android phone and want to see if there are any deals in your area, you can find Facebook in the Android Market.