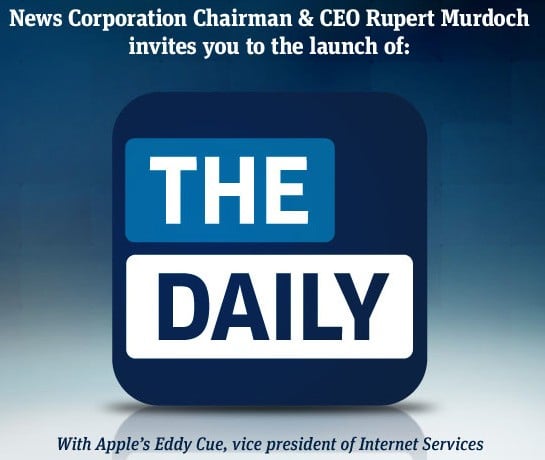 We’ve known, for quite some time now, that Rupert Murdoch was going to launch an iPad exclusive newspaper called “The Daily”. We knew it would cost $0.99 per week, and we even knew what the application icon would look like. All we didn’t know was when the damn thing would ship. Now it’s official, News Corporation and Apple are holding a joint press conference on February 2nd at 11:00 AM in New York City to show off what they’ve been working on. Curiously, it isn’t going to be Steve Jobs on stage next to Murdoch during the announcement, poor guy had to take another sick leave and we wish him all the best, but instead it’s going to be Eddy Cue, Vice President of Internet Services at Apple. Ever heard of him? Nope, neither have we.

The iPad was supposed to save mainstream media, or at least that’s what they thought. People have been buying iPads in droves, but magazine adoption has been rather weak. Many factors are to blame for that, from the high price tag, sometimes even more than what the paper magazine sells for at your local newsstand, to the fact that the iPad magazines themselves are often nothing but JPG images of the paper version. Some guys, like Wired and Vogue, threw some video in there to spice things up, but other than that … things don’t look too good. The Daily is supposed to change all that since it’s set to be the first application to utilize a new subscription billing method that’s rumored to be a part of the upcoming iOS 4.3 release. Now instead of having to buy a new issue of The New Yorker every week, you just hit subscribe and content comes to you until you choose to opt out. Like the Amazon Kindle, subscriptions are going to somehow download in the background, but that’s all rumor for now.

We’ll have to wait until Wednesday to get the full scoop.