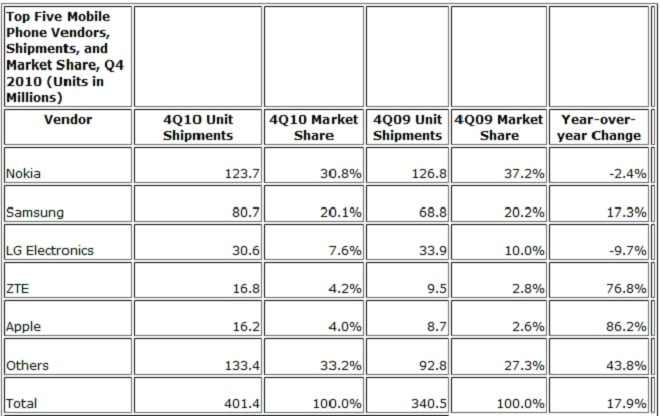 The latest phone shipment numbers are out from IDC and you have a few familiar faces at the top but the rise of ZTE and the lack of Motorola and Research In Motion from the top five gives us some interesting fodder to talk about.

The IDC report said Nokia is still the dominant phone shipment leader with about 453 million units shipped during the year. Thanks to devices like the C7, Nokia was able to bump up smartphone shipments 38% in its fourth quarter but the vast majority of its shipments were dumb phones or feature phones.

Samsung is now the top Android handset maker thanks to the success of its Galaxy S lineup and it shipped more than 280 million units for 2010. With a new Galaxy S and Tab set to be introduced next month at Mobile World Congress, things are looking up for Samsung.

LG is solidly in third place but it’s facing a bit of transition period. IDC said its “aging portfolio” of feature phones is leaving it vulnerable to competitors in emerging markets but it hasn’t fully ramped up its high-end smartphone lineups. The Optimus 2X looks like a great start into the high-end market, so let’s see what else it has up its sleeves for 2011.

ZTE only has a handful of phones in the U.S. market but it is killing it with low-end devices in emerging markets like China and India. It shipped 51.8 million units in 2010 but it will eventually have to move up the chain to smartphones.

While Apple only shipped 47.5 million iPhone units in 2010 for fifth place, it is, by far, the most profitable of all the handset makers. With the Verizon iPhone, iPad 2 and the iPhone 5 around the corner, look for Apple to continue to keep the good times rolling.

Motorola, HTC and RIM didn’t ship enough units to qualify for top 5 status but look for that to change as smartphones become the norm.

Opera and YouGov recently released the results of their survey regarding popular perceptions of online security and privacy. Compiling data...