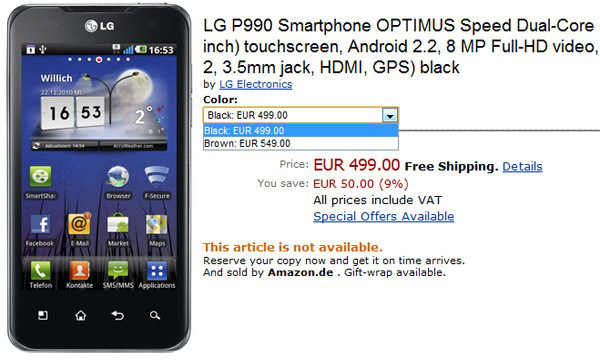 Thanks to Amazon’s German subsidiary we pretty much know the price of the two hot LG Android phones in Europe. Both the Optimus 2X (which is referred to Optimus Speed on Amazon) and super-thin Optimus Black are now available for pre-order for 499 EUR. That price, of course, doesn’t require long-term commitments, allowing you to simply insert a SIM card and use the phone with any network you fancy.

As you know, both LG devices rock 4-inch WVGA capacitive touchscreen and both run Android 2.2. The Optimus 2X is known as the world’s first Tegra 2 dual-core CPU-equipped Android phone, which is probably the reason why it’s also being called “Speed.” Amazon is also listing a brown version of the device which is 50 EUR more expensive.

On the other hand, at just 9.2mm the Optimus Black is one of the thinnest smartphones on the market. It’s also one of the first devices to offer WiFi Direct connectivity.

You can pre-order the LG Optimus 2X from here, and Optimus Black from here.

Xuxian Jiang, a computer security researcher at the North Carolina State University, has identified a security flaw in Android 2.3...