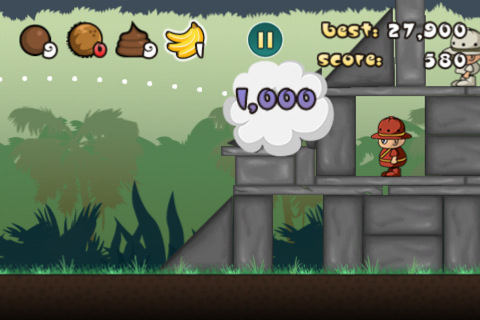 Last spring, I passed the time in the subways playing Angry Birds. The game was relatively new, but after about a month or two, I was already tired of it. When the Angry Birds holiday editions and HD version for iPad came out, it had a brief resurgence in my leisurely life, but quickly died out once again. Thinking it’d be the last of the game in my life, I find there’s a spoof of the game called Angry Turds. Um, what?

If you’ve grown tired of the Angry Birds game, videos, toys, cartoons and spoofs, perhaps you might want to give Angry Turds a try. Or maybe not. That all depends on whether you share a monkey’s inclination to fling poo for entertainment, except it will cost you – the human – $0.99 in the iTunes App Store.

Angry Turds probably won’t last in the App Store for long before Rovio catches whiff of it (har har). However, if you want to pick it up now just for the novelty, you’ll be able to fling presumably different types of doo doo as well as fruit against explorers protected by barriers.

The evil explorers have stolen all the monkey babies and it’s up to you to save them! There is only one way to stop them, throw some t**ds! With your arsenal of t**ds, coconuts, poop bombs and bananas you must defeat the explorers.

There’s no telling whether this will bring the same level of addiction or success as Angry Birds, but at least you know it’s out there. Stinkin’ up the app store.