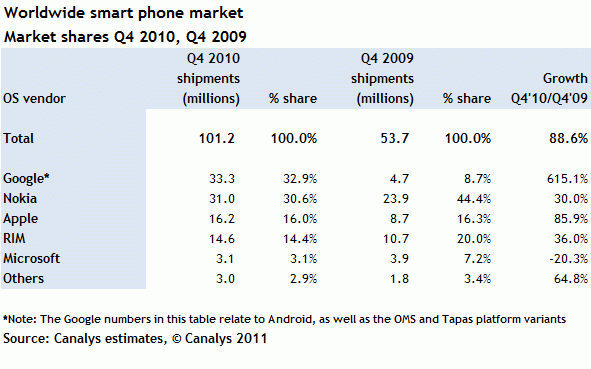 Nokia’s Symbian platform, which has dominated the smartphone scene for as long as any of us can remember, has finally, for the first time in history, been outsold on a global basis by a competing operating system. Windows Phone 7 really is that good. All kidding aside, this is obviously the work of Android, Google’s free operating system that’s been adopted by nearly everyone who makes anything that runs on a battery. Samsung and their powerful Galaxy S lineup of devices, the countless innovative handsets out of HTC, and now LG and Motorla, brining the first dual core mobile phones out to market, both packing Android. The bean counters at Canalys have figured that in Q4 2010 there were 101.2 million smartphones sold. Of those 32.9 million ran Android versus 31 million running Symbian. It gets worse. They say that in Q4 2009 Nokia had 44.4% of the smartphone space to themselves. That figure is now down to 30.6% for the same period one year later.

What’s Nokia to do? On February 11th the company is going to hold an event in London to outline their strategy going forward. During Nokia’s Q4 2010 financial results conference call Stephen Elop, the new CEO, used some vague language when discussing ecosystems and it has many analysts thinking that he’s finally had enough with both Symbian and MeeGo and is considering supporting Android. While we don’t think that’s going to be the case, you can never really know what Elop is going to do since he has absolutely no ties to Nokia whatsoever, and he has repeatedly said that he wants to crack the North American market. Then again his predecessor said the same thing … and failed to deliver during his 4 year reign of terror in Espoo.

What do you think Elop is going to announce in two weeks? He’s got to do something “magical”, to steal the word from Jobs.

Another photo of the HTC Desire successor has leaked, this time it’s called “Saga”

Motorola and LG may have been the first mobile handset makers to announce dual core smartphones, and Samsung may have...