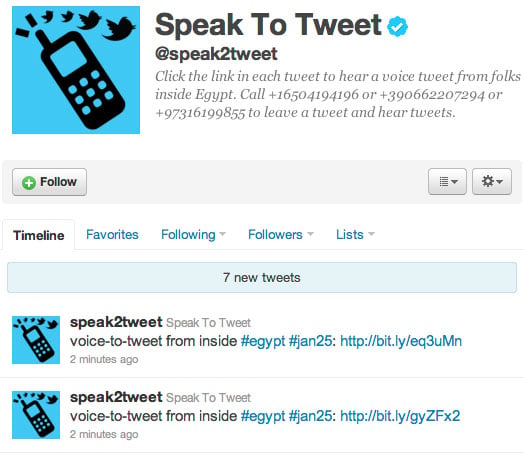 On the same day Egypt’s last ISP went dark, Google announced that it is making available a new speak-to-tweet service for Egyptian residents. Folks in Egypt that want to communicate with the rest of the world now can dial one of three international telephone numbers (+16504194196 or +390662207294 or +97316199855) and leave a message. Using technology it acquired from SayNow, the search giant will take this message, convert it to an audio file and instantly tweet it using the hashtag #egypt. People can also listen to the messages by dialing the same phone numbers or, if you have an active Internet connect, by visiting the following url: twitter.com/speak2tweet. This project was reportedly developed over the weekend in a collaborative effort that included Google, Twitter and SayNow.

Since this effort launched, Google has posted over 250 messages and this number is climbing. Many of these messages give us a glimpse of Egypt by describing the tumultuous situation in various regions of the country. In the early stages of this revolt, protesters used Facebook and Twitter to communicate with one another and with the world. These communication tools ground to a halt when the Egyptian government suspended Internet service throughout the country and disabled the use of mobile phone text messaging. By offering this phone-based service, Google asserts it is not taking a side on this political matter, but is merely opening the door for information exchange.

[Via Mashable and Google]