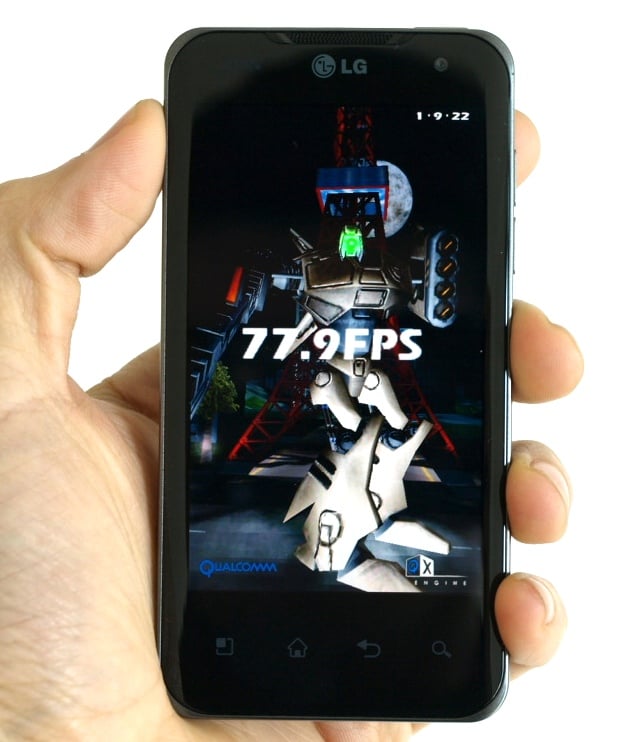 We already know that the next generation of dual-core Android superphones will be led by the LG Optimus 2X (Star) and its NVIDIA Tegra 2 dual-core 1 GHz “superchip” processor, but there’s nothing like a full suite of benchmark tests to really illustrate what kind of power to expect with dual-core processors like the NVIDIA Tegra 2 SoC (system-on-chip). So, naturally, we just had to get our hands on our very own Optimus 2X and put it through a battery of benchmarks. The result? The Tegra 2 gives the Optimus 2X the power to kick some serious Android (and iPhone) butt.

When it comes to raw processing power (the number of calculations the processor can crunch per second, measured in Millions of FLoating-point OPerations per Second (MFLOPS)), the dual-core Tegra 2 in the Optimus 2X really hauls. We used Linpack to put the processor through its paces. We ran three separate trials, which resulted in the following scores: 36.402 MFLOPS, 36.213 MFLOPS, and 35.949 MFLOPS. The scores are quite similar, which was expected. The average of the three trials was 36.188 MFLOPS. Unsurprisingly, this is the highest benchmark score we’ve ever seen for Linpack on an Android smartphone.

As far as overall system performance in concerned, we used the Quadrant Standard benchmark. This test puts the Optimus 2X’s entire Tegra 2 chipset to the test. Previous benchmark scores showed that a score of over 2300 wasn’t impossible. Our own tests show the 2X can deliver even more power. Over three runs, we saw the 2X scoring 2564, 2628, and 2566, resulting in an average score of 2586.

Now, if you though those numbers were impressive, just wait until you see what the Tegra 2 can do with 3D graphics. Keep in mind that NVIDIA has had years of experience in the 3D graphics and gaming fields, so it stands to reason that these guys really know how to make 3D games run as speedily as they do smoothly. The Neocore 3D graphics benchmark measures how many frames per second (FPS) of 3D graphics can be processed for a given 3D animation. The three trials resulted in scores of 75.1 FPS, 78.6 FPS, and 76.6 FPS. That means the Optimus 2X, thank to the Tegra 2, can push out a whopping 76.76 FPS. We expected the Tegra 2 to beat out all other smartphones in the Neocore benchmark, but we didn’t expect to see it peak at over 78 FPS!

What does an Optimus 2X with NVIDIA Tegra 2 mean for you?

Overall, there’s no denying that the Optimus 2X kicks some serious butt, as far as processing power and 3D graphics performance are concerned. So, how will all this translate into your user experience? It should translate into smooth animations and screen transitions, powerful multi-tasking, lag-free web browsing, speedy Flash, and incredible 3D gaming. Yeah, we’re impressed, too.

Make sure to check out our hands-on coverage of the LG Optimus 2X here and here.

Steve Wozniak, the geek's geek, has confirmed that the ever elusive white iPhone 4 is coming soon and talked about...