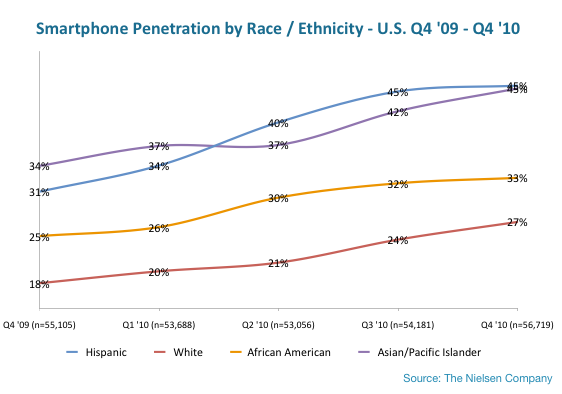 In a survey cross-referencing smartphone use with ethnicity, Nielsen found that Hispanics and Asians were the most likely to own a smartphone (45% each), followed by African-Americans (33%) and finally Caucasians (27%).  In terms of those recently buying handsets, Asians have been buying the most of the last six months (60%), then Hispanics (56%), African Americans (44%), and Caucasians (42%). Overall, Nielsen concluded that U.S. smartphone penetration in the U.S. sat around 31%, with OS preference pretty evenly spread between iPhone (28%), Android, and BlackBerry (27% each). The OS breakdown by race is pretty evenly spread, with African-Americans preferring BlackBerry (31%), and Asians leaning heavily towards iPhone (36%). As you might expect, Android commanded the most acquisitions in the last six months (43%), while iPhone and BlackBerry stayed steady at 26% and 20% respectively.

It’s interesting to see that white folks are at the bottom of the barrel when it comes to smartphone usage, but we can only really guess as to why, though even doing that much can lead to some socially dangerous stereotyping.  If any of you are feeling brave enough to take a stab at justifying the numbers Nielsen has produced, by all means, leave a comment. If you’re looking into any other ethnicity/mobile studies, there was one the other week about the effectiveness of mobile ads based on race.

We're moving into rainy season and it's prime time for those of us with butterfingers to drop our iPods and...