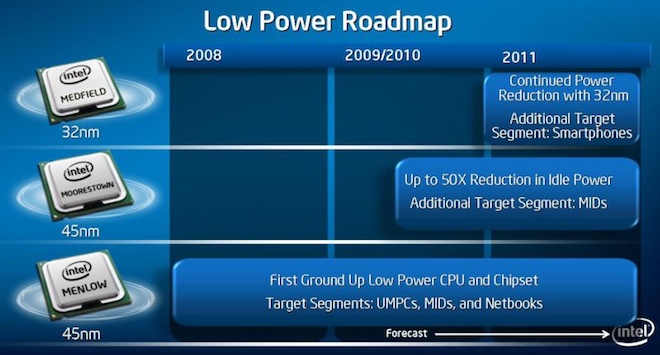 Intel is a company you don’t want to mess with. Their relentless pursuit of making better products year after year, combined with their massive manufacturing capacity, put them in a position where they’re able to move the industry at the pace which they see fit. Their road to domination hasn’t exactly a smooth path however. Several years ago they were getting their asses handed to them by rival AMD, who produced not only faster chips, but ones that used less power as well. Luckily Intel fixed that with their current processor architecture, but now they’ve got a new battle ahead of them and that’s mobile. I’m not talking about laptops either, since Intel has done a fine job making chips that enable a full work day of usage from a single charge. I’m talking mobile phones and tablets, a field that has been dominated by British firm ARM since what feels like the beginning of time.

Trying to fit the same processor that’s inside the machine powering the operating system and browser which you’re using to read this article, into something the size of an iPhone 4, while delivering the same battery life figures as the iPhone 4, has been Intel’s goal since they first announced the Atom processor for netbooks. One missing part of the equation was wireless radios. Intel may have invented WiFi, and were largely responsible for WiMAX, but when you’re talking mobile devices you’re talking GSM, UMTS, HSPA, and LTE, standards that Intel knows nothing about. Until now that is.

Announced back in August 2010, Intel said they would purchase Infineon’s Wireless Business. That deal is now complete. This is crucially important since Intel can now offer their customers, not people like you and me, but the guys who make devices, a complete solution from application processing, graphics processing, and finally connectivity.

Expect to hear about Intel inside mobile phone like devices during 2012 to 2013, and when you do … there’s going to be a flood of them.

Telefónica and MasterCard team-up on mobile payments in Latin America

Telefónica and MasterCard are teaming-up to "lead the development of mobile financial solutions in 12 countries in Latin America where...