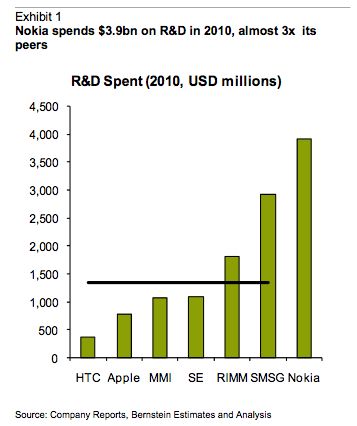 Some research by Bernstein has revealed that Nokia has spent upwards of $3.9 billion on research and development, which is close to three times as much as the average spent by competing mobile manufacturers. Okay, sure, Nokia is still the biggest in the world (for the time being), so it’s not entirely surprising. Samsung was next in line, spending in the neighbourhood of $3 billion, followed by BlackBerry-maker Research In Motion at around $1.7 billion, Motorola and Sony Ericsson at around $1 billion, and Apple and HTC taking up the last two slots.

A lot of Nokia’s money is still going into the recently-reabsorbed Symbian (1.1 billion euros, between the kernel and user experience), with about a quarter of that amount going into their next-generation MeeGo and Qt platform. For as much as Nokia spends on their devices and services, they spend almost as much (2 billion euros) on their infrastructure partnership with Siemens.

For all of the trash talk slung Nokia’s way, they’re still the king of the hill, and have big bucks going behind their next generation of devices. It’s a given that Symbian’s slowly petering out, but I’m really looking forward to how MeeGo will compete in the new mobile landscape. Who knows, maybe we’ll see some of the fruit of this monstrous R&D budget at MWC next week.