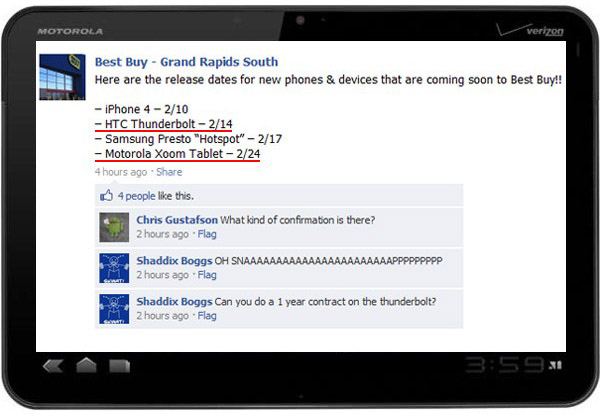 We have new launch dates for two of the hottest gadgets on the market. Engadget’s source says that Best Buy will get the Motorola Xoom on February 24th and HTC Thunderbolt on the 14th. Sure these are not the first leaked launch dates for two Android devices, but since we’re talking about such “objects of desire,” we just couldn’t help it but write about the “rumor date” again.

Previously, we’ve heard that the LTE-enabled Thunderbolt will start selling on February 24th. The new information says that could happen 10 days before. When compared to AT&T’s offering, that’s one day after AT&T will launch the Inspire 4G and that kinda makes sense.

Both Thunderbolt and Inspire 4G are basically versions of the HTC Desire HD customized to take advantage of Verizon’s and AT&T’s networks, respectively. Motorola Xoom, on the other hand, is/will be one of the first (if not the first) Android 3.0 Honeycomb-powered tablet.

Boy are we looking forward to play with these bad boys at the Mobile World Congress in Barcelona. Stay tuned… 😉