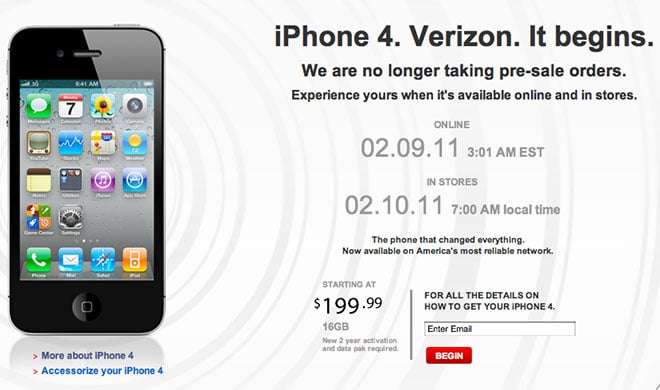 In less than 24 hours, Verizon and Apple sold out of their pre-order stock of iPhone 4 handsets. The actual number of handsets put aside for the pre-order was not disclosed, but Dan Mead, president and CEO of Verizon Wireless, confirmed Verizon had the most successful first day sales in the history of the company.  So successful, it sold more handsets from 3-5 a.m. than it has sold during the first day of any other launch. These previous launches include the highly-touted Motorola DROID and Motorola DROID X. Customers looking to purchase the iPhone yesterday can attest to these brisk sales with intermittent slow downs and server crashes commonplace throughout the day.

Now that the Verizon-only pre-order is over, all customers, including those from Verizon who failed to order an iPhone yesterday, will have a chance to order online starting February 9th at 3 a.m. For those that don’t want to wait for the handset to ship, the iPhone 4 will be available in Verizon Wireless retail stores, Apple stores, select Walmart locations, and in Best Buy starting February 10th. All retail stores will open at 7 a.m. You can also purchase the iPhone online verizonwireless.com and Apple.com.

Verizon’s press release announcing its record sales is on the second page.