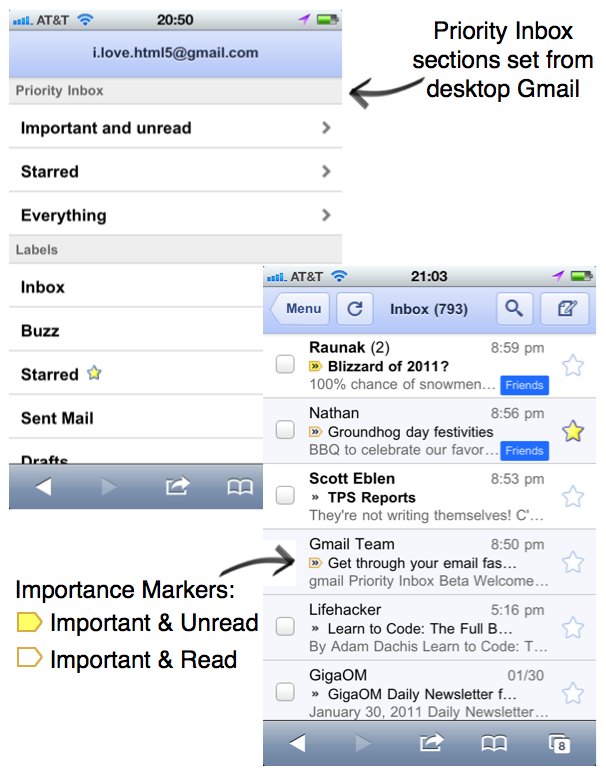 When email was invented I bet the boys and girls who created the near instantaneous communications tool didn’t envision the hell they would put humanity through in the future. From spam to your idiot colleagues hitting the reply all button, the torrent of messages that flood our inboxes can sometimes be overwhelming, and sadly there are even days when we miss important emails from friends and family. That’s why Google invented priority inbox, a feature that uses Google’s algorithms to determine who is most important to you and then shove email from said person into a special folder that you can check separately from your clogged up inbox. This feature has been available solely for the desktop version of GMail and later versions of Android, but that changes today thanks to the modern HTML5 capable browsers. That’s right, priority inbox is now a feature of GMail’s mobile website. To use it just tap menu and you’ll be given the choice of going through either unread or read messages that have been deemed “priority”, useful if you’ve got only a few moments of free time to scan your messages.

We like this, but even we have to admit that text messages have all but taken over our important communication with close friends. For one thing, everyone has a phone that can do SMS, so they don’t need the latest gizmo in order to get an invite to a party. Second, that 160 character limit makes people stop blathering on and on and on and forces them to stick to the point. Third, just like email, SMS is asynchronous so you’re not going to interrupt your friend, whereas some people turn off push email notifications because as stated above, they get far too much junk in their inbox.

Anyway, give it a go, we’re sure GMail power users will love this.