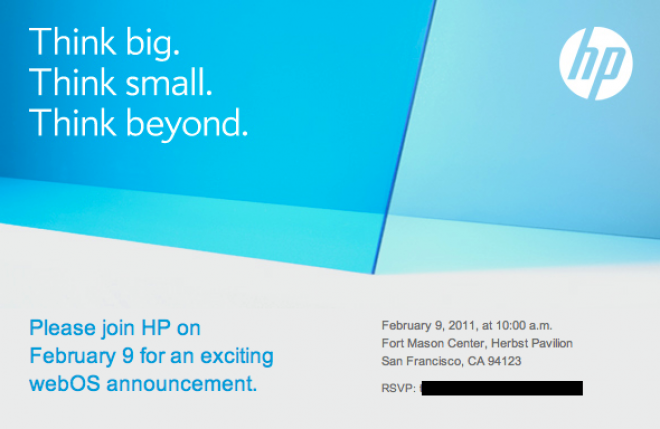 Well folks, it’s about that time – time to find out what HP and Palm have been up to with WebOS. We’re not exactly sure what we’ll see at tomorrow’s HP press conference, but we have a few good guesses..

One thing we can be almost positive about is that HP will announce their WebOS tablets, the Opal and the Topaz. We’ve been expecting these tablets for some time now, and tomorrow we will get our first real-world glimpse at WebOS running on a tablet device. Rumor has it that the tablets will hit market in June, and we’re hoping to get more info on that tomorrow morning. What we do know is that the tablets will come in multiple versions for AT&T and Verizon data services, as well as a WiFi-only option.

We can also expect at least one WebOS smartphone to be announced, and it’s about time. WebOS needs a much more diversified portfolio, and I’d love to see a handset with a 3.7 to 4-inch display. The OS itself it just too darn sexy to be held back by small screen sizes, and we hope HP has realized that by now. If all that’s announced is a Palm Pre 3, I’ll have given up on the OS as a potential alternative to my Android phone. It would be smart of HP to announce more than one device, but we won’t be surprised if we get just the one.

HP might also announce a cloud-based service for users that will keep them connected through their WebOS devices. Wireless transfer between a WebOS tablet and phone could be as easy as tapping the two devices together, and be able to have storage for your content in the cloud. This would bring a nice integration between devices, and we can’t wait to see what Palm and HP are cooking up with their Touchstone dock.

The timing could be better. If the tablets are to launch sometime in the middle of the year, hoards of Android Honeycomb tablets will have already been out for some time, and will be headed down the pipeline. We’ll also likely have already seen an iPad 2 in that time as well. Hopefully HP can deliver enough with these tablets to convince potential customers to hold out for them – and with the right hardware and software optimizations, that’s certainly possible.

We’ll be there live tomorrow giving you all the nitty-gritty on the announcement, so stay tuned!

Is there anything you would you like to see announced tomorrow?

A tip sent into skatter tech suggests the BlackBerry PlayBook may land at Verizon Wireless. The tipster sent in the...