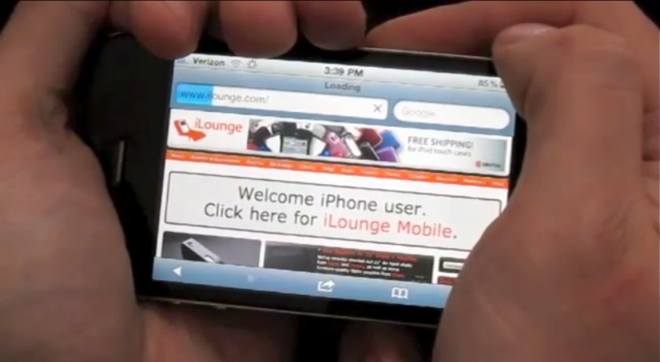 Are you getting tired as I am of these iPhone 4 antenna issue stories? Let’s make one thing perfectly clear: the iPhone 4’s antenna, whether it’s the GSM or CDMA iPhone model, is also its frame. When you touch that frame, you’ll have some attenuation issues whether you’re gripping it as you would when making a call, or when you’re grasping it like a damn nutjob just to prove a point.

We no longer have the infamous “Death Grip” that plagued the AT&T version of the iPhone, now it’s all about the “Death Hug.” Somehow the latter just sounds a little cuter – adorable but deadly.

As you’ll note in the video below, if you make every conceivable effort to grip the Verizon iPhone in the most awkward way, you’ll eventually be able to reduce its radio’s ability to transmit or receive information whether it’s over 3G or WiFi. You’d think it would be obvious by now that the reason the Verizon iPhone didn’t exhibit the typical death grip issues during its unveiling – as mentioned in the video below – is because of Verizon’s network.

A small handful of journalists, myself included, can’t make a definitive assessment over the course of a few minutes in a very limited area. Verizon’s signal strength is typically strong in many regions where AT&T is weak, but I’ve also been in areas where Verizon was piss poor. Conditions during the unveiling might have been optimal for Verizon and the CDMA iPhone demo units.

If you’ve done any traveling with the first iPhone 4, you might have noticed that grasping the phone tightly does little to attenuate signal strength where AT&T coverage is strong. But in areas where AT&T’s coverage was mediocre or weak, touching the antenna anywhere seemed to cause problems.

I don’t know how many times I have to say this, but the fact that you’re touching the antenna itself is going to cause some issues — more so in some cases than in others. And guess what? If you grasp the entire thing – because it’s just so natural to do that – you’re going to kill the signal. However, almost all reviews of the Verizon iPhone have been overwhelmingly positive when it comes to its ability to make phone calls and surf the web. Whether that will still hold true once millions of units flood the network remains to be seen.

Before you let videos and stories like these scare you away from making a purchase, exercise a little skepticism. Unless you’re afraid you’ll get robbed on the train while watching a video on your phone, there is almost no reason you should ever be holding it as demonstrated below. It is definitely not an issue and it most certainly is not a problem.

It looks like the LG Revolution will be the first Verizon phone to make voice calls over the 4G LTE...