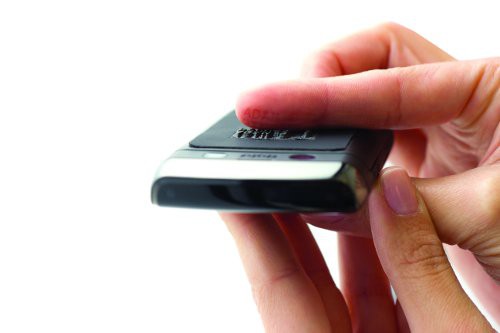 A project sponsored by BlackBerry-maker Research In Motion in the UK proposes a bold new use for your battery door. By using piezoelectric technology (which stiffens materials based on electrical current), SkinDisplay is a concept which lets you press your finger into raised text messages on the back of your phone, and read the impression. The idea here is that you could see what’s going on in a discreet way, without pulling out your phone. The actual implementation sounds mostly crazy, but the concept was introduced alongside some software, SmartCall, that actually sounds pretty good; using their app, you would be able to set your current status as busy or otherwise unavailable, as well as request calls back from others within varying time frames and levels of urgency.

The inspiration for both of these ideas is to enable more sensitive communicating over mobile, which is noble indeed given the bad rap BlackBerry gets for continually distracting users from the immediate world around them. BlackBerry in particular is so speedy with delivering text messages that it has set a new level of etiquette when it comes to the time it takes to respond; it’s not uncommon in some circles to be put off if a BBM message isn’t replied to within five minutes. With the right tools though, we might be able to relax a little bit, and put our phone away once in awhile without feeling utterly and completely disconnected. I’m not quite sure the answer is subtle skin-printing, or a biometric ring that senses my mood and shares it online, but they’re both directions to consider. The SmartCall software seems most viable at this point, but depends on everybody using the same app or service; maybe it’ll be a manufacturer’s job to start baking these kinds of etiquette options right into the native messaging and phone applications.

Anyway, here’s a video demonstrating how SkinDisplay could work. Wacky and far-fetched, maybe, but I wouldn’t have concept projects any other way.

Google hosts an annual event called "Google I/O" where they talk about how the company is doing, where they're going,...