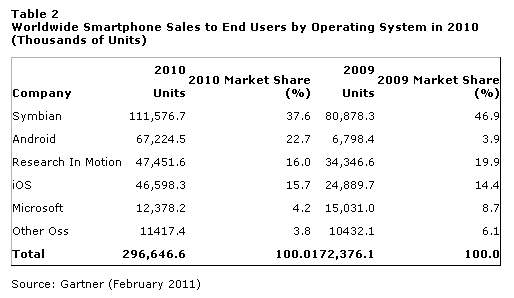 Gartner released their findings on the 2010 mobile market recently, following up on those from IDC and Strategy Analytics. Most of the data is pretty much in agreement: Nokia, Samsung, and LG still rule global mobile shipments, followed by RIM, Apple, Sony Ericsson, and Motorola. In terms of smartphone OS market share, Android had a meteoric rise to second place behind Symbian, which is to be expected when other studies suggested that Android actually outsold Symbian in Q4. The figure that really caught my eye was that in 2009, there were about 6.7 million Android phones shipped, while in 2010, we 67.2 million were shipped, capturing 22.7% of the market share (versus 3.9% the year before).

As for the others, I still think the iOS number is cheating a little bit because it’s including iPad and iPod Touch devices, which aren’t really a part of the cellular space, and combined sell at least as much as the iPhone. Then again, Google has its own advantage by recruiting a wide number of manufacturers to using Android, while RIM exclusively handles BlackBerry hardware and software end-to-end. Despite continuing to grow, Symbian isn’t maintaining as big of a slice of the pie as they used to, which is to be expected with more competition. Windows Phone still has a ways to go, especially considering Microsoft’s old Windows Mobile platform is still outselling their new OS.

More data featuring the global market (i.e. not just smartphones) can be found below, plus more information on the Gartner report at the via link at the bottom. 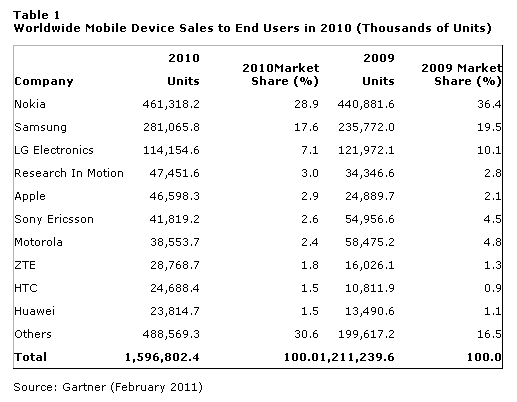 The Verizon iPhone is officially here for everyone

It has been just shy of a month since the Verizon iPhone was officially announced in New York City, and...