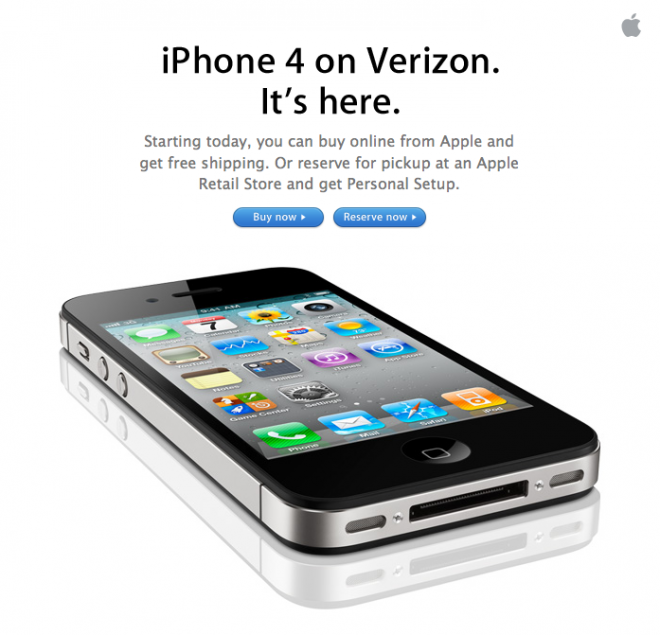 It has been just shy of a month since the Verizon iPhone was officially announced in New York City, and many Verizon customers already have theirs in hand. For the rest of us, however, today is the day we can order it online from Apple and have it shipped out ASAP. Tomorrow, it will be officially available but some of us want to stake our claim now, especially seeing how quickly pre-orders sold out last week.

The CDMA version of the Apple smartphone has reportedly fared much better than its GSM counterpart on AT&T in terms of making and sustaining phone calls, along with accessing data and surfing the web. There was a small blip yesterday when a silly “discovery” was made that the Verizon iPhone also had antenna issues. Also unlike the AT&T version, the Verizon iPhone has mobile hotspot capabilities so you can connect up to five devices at once via WiFi to access the Internet.

For the 16GB version, you’ll be forking over $199.99 on a new, two-year contract. The 32GB model fetches $299.99. The only real question now is – should you buy it? That’s been the great debate. We know that Apple’s iPhone cycle is like clockwork and comes out almost the same time every year. This summer should prove to be no different – it would be a huge surprise if it was – and so the next iteration might be just a few months away. Unless you absolutely need a phone right now, it might be wise to wait. Otherwise, enjoy!

When I think of Valentine's Day I think of Cupid prancing around, shooting his arrows into people to help them...