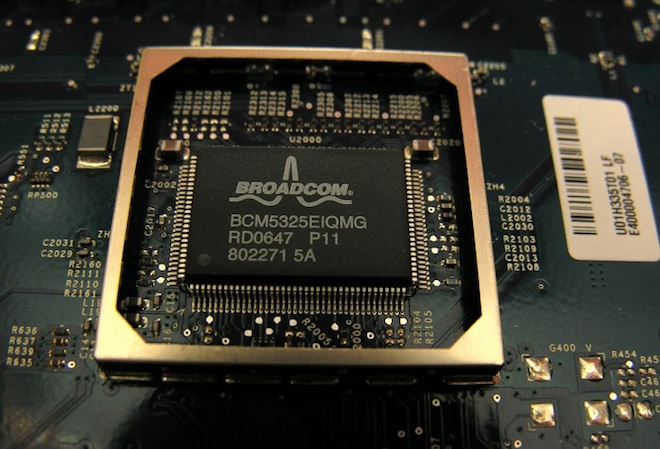 Broadcom is a chip maker you don’t hear about all too often, which is a bit of shame since they make a sizable amount of WiFi and Bluetooth chips that you’ve probably used in various products without even knowing. Today they’re stepping up their game and have announced several new products, the most impressive of which is the BCM21850. It’s built using a 40 nanometer process, which is smaller than the current 45 nm solutions from Qualcomm and Texas Instruments, making it cheaper and less power hungry. It has two ARM Cortex A9 processors clocked at 1.1 GHz, an HSPA+ modem that can do 21 Mbps download speeds, the ability to spit out 1080p video at 60 frames per second, and best of all it supports Android 2.3 (Gingerbread) right out the box. This is clearly aimed at competing with Qualcomm, who with their Snapdragon platform have made it ridiculously easy for handset makers to slap together a handful of components and ship a working device with little to no effort. Release date? None given.

Next up is the BCM21654 and it’s a single core version of the BCM21850 along with a slower modem that can only do 7.2 Mbps HSPA. Other features that were chopped off include support for HDMI output. What makes the BCM21654 unique however is support for dual SIM cards, something that’s really popular in places like Africa and some parts of Asia, where having two numbers is a necessity in order to cut down on costs. No word on when this puppy is due to hit devices and how cheap said devices will be. Broadcom says the BCM21654 is perfect for low cost handsets, so how low can they really go?

In 2011 dual core smartphones are going to become standard fare, and before long we’ll consider such a remarkably achievement boring. What interests me is how much longer will it take to make an Android device as powerful as today’s flagships, but for under 300 Euros?

[Photo above is totally unrelated to this article. Just thought it looked cool. Via: Vonwentzel.net]

That screen you love to poke, prod, and swipe, is made up of several components that the average man on...