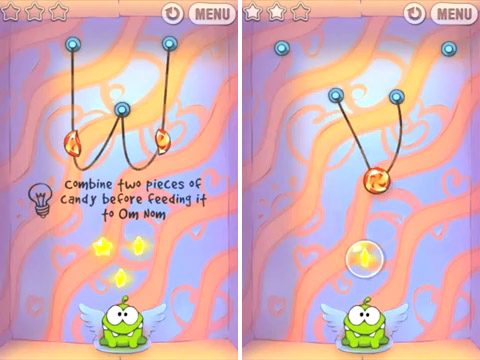 The publisher (Chillingo) also revealed that the popular game has now sold more than six million copies worldwide on the Apple AppStore.

If you’ve been living under a rock, you should know that in Cut the Rope players slice the right ropes to feed the insatiable green creature called Om Nom. It may sound stupid, but it’s actually addictive.

Commenting on the new update to the game, ZeptoLab’s CTO Efim Voinov (ZeptoLab is the game developer) said: “This 1.2 update is our gift to you this Valentine’s Day for being the greatest fans out there; we hope players love the new box, levels and features just as much as we enjoyed creating it.”

And now it’s video time. Here’s what to expect in Cut the Rope 1.2. Enjoy!

YourCards is a new e-greeting card app for iPhone and iPod Touch, unveiled just in time for Valentine's Day. Available...