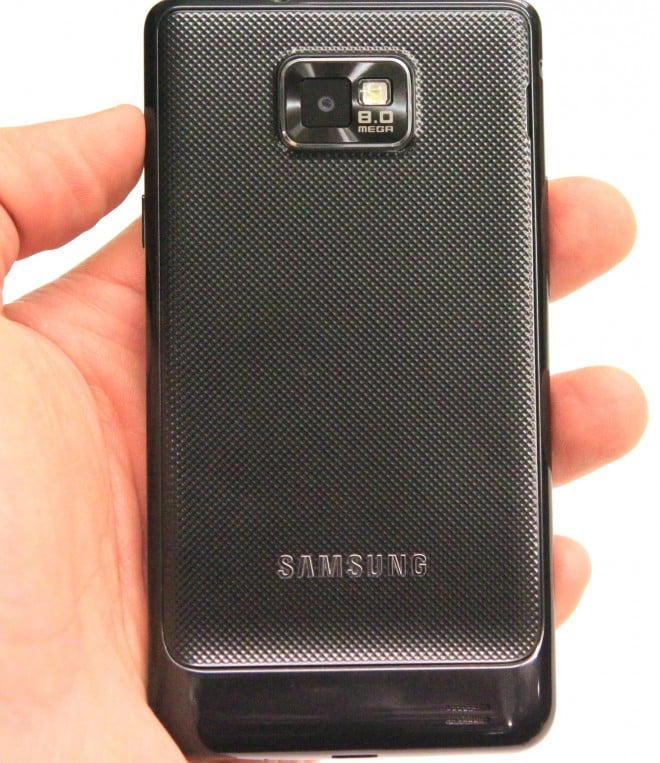 So, Samsung just announced the next-generation Galaxy S phone and we we able to get some hands-on time with the new Galaxy S 2 and this thing is quite impressive.

The first thing to jump out at you is how thin and light the Galaxy S 2 is, as it’s only 8.49-millimeters thick and its incredibly light in your hands. Like the Galaxy Tab 10.1, it has a dimpled back that makes it more ergonomic to grip, and also lends a more premium feel to the device.

Like with the Infuse 4G, the Galaxy S 2 has a Super AMOLED Plus display and it’s quite bright and vibrant. Text looks brilliant and photos and videos really pop out of the screen.

It’s not a revolutionary change from the original but the Galaxy S 2 does take some smart evolutionary steps in the design to make it feel like a standout device. The front-facing camera rests atop the screen and, like the original one, the face only has three Android buttons with the search key put to the wayside (the U.S. variants had four buttons).

Inside, it’s a different story, as the Galaxy S 2 rocks a dual-core processor that enables it to do things like record video in full 1080p HD. This should also enable some great gaming, as the company is pushing the gyroscopic and accelerometer controls as a way to bring Android gaming to a new level.

Thankfully, the Samsung Galaxy S 2 will launch with Android 2.3 and a customized user interface. This latest version of the Android software will enable the device to take advantage of NFC capabilities, as well as let it gain access to the overall performance improvements.

This Android smartphone also has the TouchWiz 4.0 UI, Samsung’s custom skin for its Android devices and it features a variety of tweaks. You get a more customizable homescreen, an app tray that has been refined to include a 3D rotating effect and the company has put a stronger emphasis on its hubs.

Overall, the Samsung Galaxy S 2 is a great-looking and performing smartphone and it is bringing the super phone game up another notch. Let’s see how the competitors react.

Sony Ericsson announced the Xperia neo, a companion handset to the recently announced Xperia pro. The neo lacks the portrait...