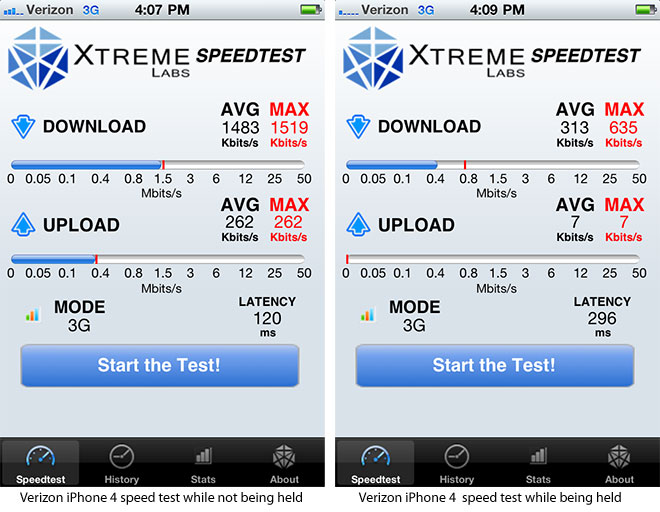 Despite initial assertions to the contrary, the Verizon iPhone 4 is susceptible to the death-grip. The death-grip phenomenon emerged when the GSM iPhone 4 landed in the hands of consumers shortly after its launch in June 2010. Owners of Apple’s latest iPhone noticed a drop in signal bars when they held their handset tightly in the palm of their hand. This style of holding the phone was called the death-grip and the whole debacle became know as antennagate.

Apple responded to this issue by denying it was a problem and instructing people to hold the phone differently. The prevailing theory blamed the antenna design which made it easy to contact the antenna with your hand which caused the signal to attenuate. To quell the ever growing complaints, Apple began offering free bumper cases to iPhone owners. The bumper case prevented contact with the antenna and indirectly fixed this troubling issue.

We have been able to duplicate iLounge’s results with our own handset and have further shown that the death-grip affects data performance. An iPhone 4 held comfortably in the hand will drop bars from three down to one in a matter of minutes. This bar drop affects data performance which likewise starts with download speeds of 1800 Kbits/s and plummets to as low as 90 Kbits/s/s when the Verizon iPhone 4 is held in the palm of you hand. Similarly, latency and upload speeds are also affected by this problem.

The take home message is that Verizon customers with an iPhone should your grab a case for your new handset, especially if you notice unusually slow data speeds. A new case will protect your iPhone during falls and will prevent a disruption in your data and phone calling due to this death-grip problem.

A short video demonstrating the death grip is available below.