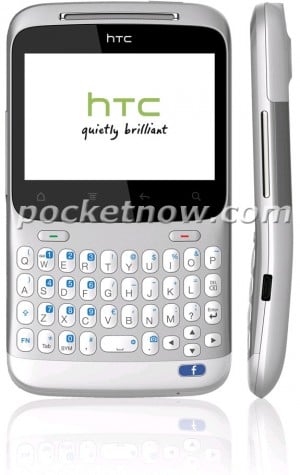 The folks at Pocketnow scored press photos of  two Facebook handsets rumored to be under development by HTC. The two handsets seem to be entry-level Android handsets with deep Facebook integration. At the time of the earlier leaks, the Taiwanese handset maker declined to comment and Facebook towed the company line by confirming it opens its social API to OEMs, but is not developing branded hardware.

The pair includes a full-touchscreen offering as well as a model with a front-facing keyboard and a smaller LCD. The two seem to be running a slimmed-down version of Android and feature a very prominent Facebook button.

According to Pocketnow, the handset pictured to the left will be the Snap 2 and the full touchscreen model pictured on the second page will be the HTC Icon. The Snap 2 may be the successor to the original Snap which, ironically, was powered by Windows Mobile.

As expected, the popular social network is reportedly deeply woven into the underlying OS with status updates and alerts being sent to the handset. The camera app may also allow users to automatically upload images and video to the users Facebook account.

Despite HTC’s non-response, the appearance of these press photos suggest the Taiwanese manufacturer is indeed working on at least two Facebook-centric phones. HTC is kicking off its Mobile World Congress press event tomorrow and these two handsets may be officially unveiled alongside a bevy of other Android and Windows Phone handsets. We will be live at the press event so check back tomorrow for all the details.

T-Mobile's fastest HSPA+ 4G handset, the Galaxy S 4G, is both familiar and new all at the same time. The...