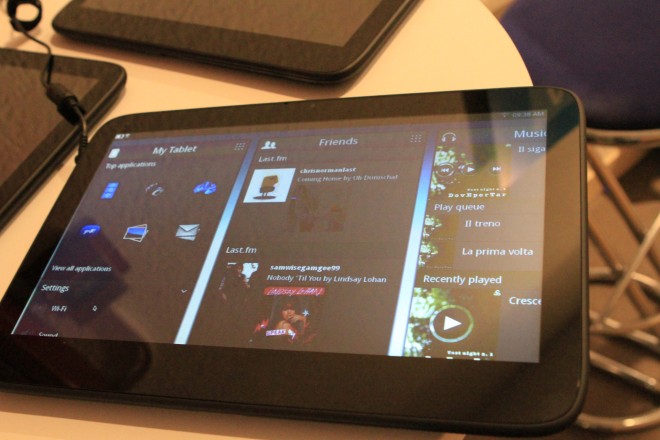 So, when Nokia decided to back Windows Phone 7, it looked like MeeGo was going to suffer a not-so-noble death. Well, don’t tell that to Intel, as the company is still planning to support the platform and it showed off a developer reference tablet at Mobile World Congress 2011.

I hate to be super critical of early software but what I saw of the Intel MeeGo tablet shows me that the operating system is nowhere near ready and it was a slow, buggy, sucky experience. Experiencing the MeeGo tablet myself was enough for me to dismiss all the talks of Nokia CEO Stephen Elop being a “trojan horse” for Microsoft – if MeeGo was Nokia’s high-end strategy, it was time to turn to another platform.

The Intel MeeGo tablet was just an Atom-base ExoPC Slate with MeeGo on it and there’s a standard apps-in-a-grid interface that we’ve all grown accustomed to but there’s also a Panels UI that Intel is touting. This sort of looks like the Eden UI we’ve seen on the Notion Ink tablet. It’s supposed to be an “object oriented” user experience where your content and people are laid out right in front of you so you dont’ have to dive into apps but what I saw was a mess.

The Intel MeeGo tablet UI was slow, buggy and you could even still see the cursor as the input method. There was no fluidity in the movements and interactions and the layout didn’t necessarily get me to the stuff I wanted in a quicker way.

This is an amazing disappointment really, as Intel and Nokia have been working on the MeeGo operating system for at least a year and it is still not even close to being ready for prime time. Nokia has said that it will keep this on as an “experiment” but I’m not really seeing much value in that right now.

Ok, so I’ve been a bit harsh on the Intel MeeGo tablet even though it’s an early developer’s reference model. There is still plenty of room for improvement and a year isn’t really that long in a platform’s life. The problem is that it will have to play catchup to iOS, Android and QNX and it looks like it may be too far behind. Check out the pictures and we’ll have a video up as soon as possible.