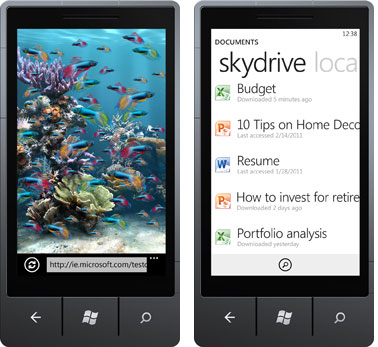 Microsoft filled in some gaps in its upcoming plans for Windows Phone 7. The Redmond company confirmed that the mobile version of Internet Explorer 9 will debut on the platform in the second half of 2011. IE9 Mobile will support the same standards (HTML5, etc.) and include the same hardware accelerated graphics as the PC version. The new mobile browser will bring improved rendering speeds and an overall performance improvement for those who live on the web.

Microsoft also revealed a tentative release schedule for highly anticipated features such as copy & paste and multi-tasking. According to the press release, Microsoft will roll out the following new features:

As part of its press event, Microsoft also hinted that Windows Phone will become a companion product to Kinect, a no-brainer move that may help spur sales of the handset. And those CDMA versions of Windows Phone, they are stil slated to go on sale with Verizon Wireless and Sprint in the first half of 2011.

Speaking of sales, Microsoft confirmed that is has sold 2 million phone licenses in 2010 and is now offering Windows Phone handsets on  60 mobile operators in 30 countries globally. Though no release date was provided, Microsoft confirmed it was planning to deliver a significant volume of Nokia Windows Phones in 2012. Windows Marketplace is also growing at a respectable rate with over 8,000 apps and 28,000 registered developers. For additonal details on WIndows Phone 7, check out the rest of Microsoft’s press release on the next page.

Texas Instruments is making it a little easier to develop software for Android with what it's claiming to be the...