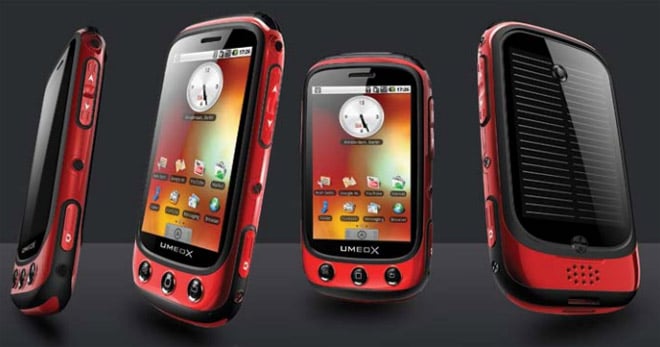 You may haven’t heard of Umeox Mobile before and I don’t blame you. It is a Shenzhen, China-based ODM (Original Design Manufacturer) which rarely sells its products in the Western hemisphere.

The company has teamed up with Dutch company Intivation to launch a solar-powered Android smartphone called Umeox Apollo. As you can imagine — and see from the image above — this baby comes with a solar panel on the back, which [panel] is made using Intivation’s SunBoost3 Smart Cell solar module that works even in low-light conditions.

Aside from that, Umeox Apollo is a pretty standard mid-range Android smartphone with a 3.2-inch HVGA touchscreen, 3-megapixel camera, FM radio, 512MB of RAM, Bluetooth, HSDPA, WiFi and so on. In addition, it comes with a rugged casing that apparently makes sure the Apollo “will last, at work AND play.”

Now I can’t help but wonder which of the major handset manufacturers will jump on-board and make its own solar-powered smartphone. We know Samsung had that Blue Earth all-touchscreen feature phone, which seemed pretty decent at the time it was announced. As a matter of fact, by simply adding a more powerful processor inside the Blue Earth could prove sufficient… or not. What do you say?

Viewdle is an app that was being shown off at Mobile World Congress 2011 that really caught my eye. Using...