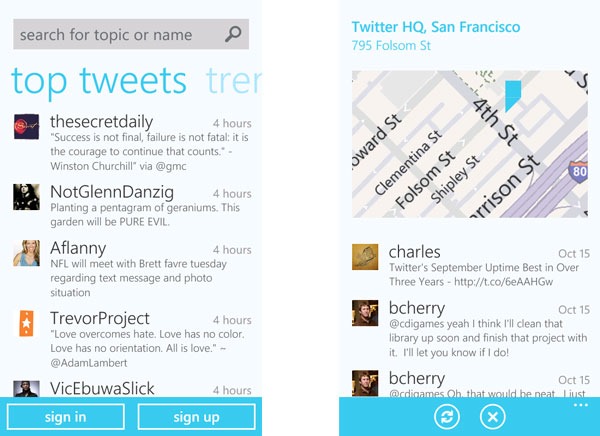 Twitter addicts who happen to use Windows Phone 7 devices now have something to look forward to: the Microsoft mobile platform will be getting a native Twitter client some time in the second half of this year. Yes, it’s a while from now, but better late than never. And with all that time to get it released, hopefully it will be done right.

While there is an official Twitter client for Windows Phone 7 out now – it was our top pick for the 25 must-have apps on the platform – we’re guessing that a native one will be more integrated with other services and apps within Windows Phone 7. With the deeper integration, you’ll probably be able to connect and share things on the social networking service from within most of the other native applications.

Twitter usage has grown exponentially the past few years, and these days, during big events, the service can see anywhere between 3,000 to 6,000 tweets per second worldwide. That’s pretty impressive for a social network, or micro-blogging service, that was written off as a useless niche product just a few years ago.

The integration of Twitter within a platform comes as no surprise these days when you have the option of sharing photos, contact information, your current activities within an app (like listening to music or watching a video clip) and a whole lot more. Currently, only Android really allows Twitter some deep integration with its widgets, contacts and more. Windows Phone 7 is headed in the right direction by doing the same, and then some, with a native client of its own.

It’d be nice to see the iPhone do the same thing, but it’s not likely at all. Social networking is become more mobile, and the deep integration of Facebook and Twitter is a huge plus for many users. I’m glad to see that WP7, given how young it is and that it still needs a lot more work, is taking strides in that direction.

Verizon Wireless and Alcatel-Lucent are showing off multi-player gaming over 4G LTE, which is now live in parts of the...