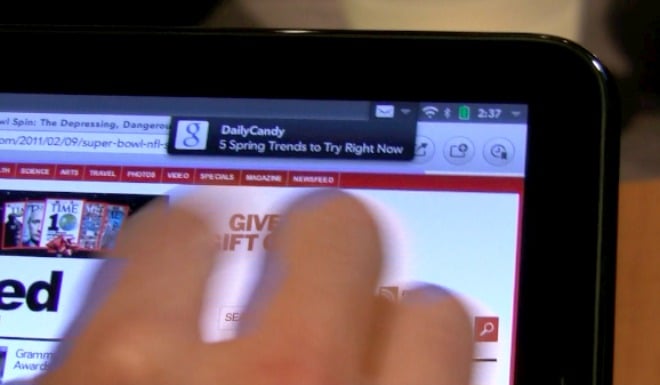 I’m sure you’ve already checked out our hands-on video of the just-announced HP TouchPad webOS tablet but we couldn’t resist getting another taste of the webOS tablet at Mobile World Congress.

The HP TouchPad webOS tablet has a 9.7-inch display, a 1.2-GHz dual-core SnapDragon processor from Qualcomm, 512 MB of RAM, a 1.3-megapixel front-facing camera for video calls, WiFi 802.11b/g/n, Bluetooth, 3.5 mm headphones jack, TouchStone dock compatibility, 16 or 32 GB of storage and a microUSB charger. It’s pretty much what you’d expect from a tablet nowadays.

At the unveiling, we didn’t really get too much time to speak with HP about its in-depth strategy but we did get a chance to chat at Mobile World Congress. We did get a few interesting tidbits about this device and how the company plans to market webOS in general.

To me, the HP TouchPad webOS tablet is a really good device but the price is going to be an important determining factor. The company said it’s definitely not aiming this at a super low-end price (so $299 is out the door) but it will be competitive with what’s on the market. Executives told me the rumored prices of the Motorola Xoom were way too high, so I’m thinking we’ll see this land at around the $600 mark.

The company also plans to leverage its size (it’s the biggest technology company in the world) to push webOS all over the place. The touch-to-share feature that allows you to push content from the tablet to a webOS smartphone will eventually be phased into other devices. Tapping your smartphone or device against a webOS printer to print content is bound to happen.

There has also been some talk that the BlackBerry PlayBook QNX operating system copies many of the elements of webOS and HP just said that it was “flattered” that someone else thought its interaction metaphors were worth imitating. Now that it’s on the 2.1 version of the platform, the company is confident that its tablet will be a success and we can look forward to a big marketing push.

GSMA used its Big Show to unveil some cool numbers regarding GSM-based technologies adoption. We crunched the numbers to bring...