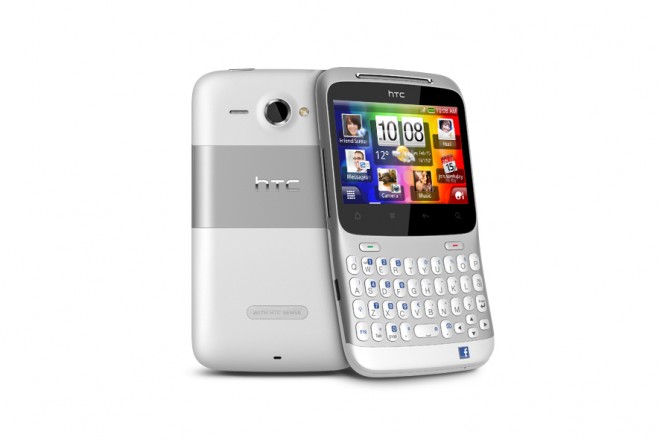 The HTC ChaCha made its live appearance at Mobile World Congress here in lovely Barcelona, Spain, and it looks like a pretty neat Facebook phones for those who love typing away on physical QWERTY keyboards. Given its candybar design with the keyboard out in front, it’s a small departure from what we’ve seen in terms of HTC design and style as of late, but there are still little touches that are very HTC-esque.

HTC’s ChaCha has a bit of a strange contour that makes the device face toward you in an awkward way, but we’re sure it’s something that you can easily get used to after a while. It has a 2.6-inch, 480 x 320 touchscreen display which is rather small, but a small sacrifice is a physical keyboard is a must for you. Like the Salsa, the ChaCha also sports a 600MHz processor, 512MB of ROM and RAM, a 5MP rear camera and a VGA front camera for video chatting and self portraits.

This particular device will be launching with Android 2.4, which is going by the Gingerbread name but will be more optimized for devices with dual-core processors. We’re sure that we’ll find some other tweaks and improvements as well.

Being a Facebook phone, the social networking service and its features are very evident on this phone. Facebook is deeply integrated within HTC’s Sense UI, so you can share items with all your friends and keep in touch with your Facebook contacts, too. There is a dedicated Facebook button down below which glows whenever you’re in an app or feature that allows you to share info with the social network. A pretty cool feature is the ability to check into your current location by holding that Facebook share button down.

Pricing for the device still hasn’t been specified, but we do know that it’s going to hit in Q2 2011. We do like where this Facebook phone thing is headed, so we’re hoping to see a few more of these bad boys on the high end later this year.

Deutsche Telecom just made traveling in Europe a whole lot easier  by announcing a new flat rate data plan for...