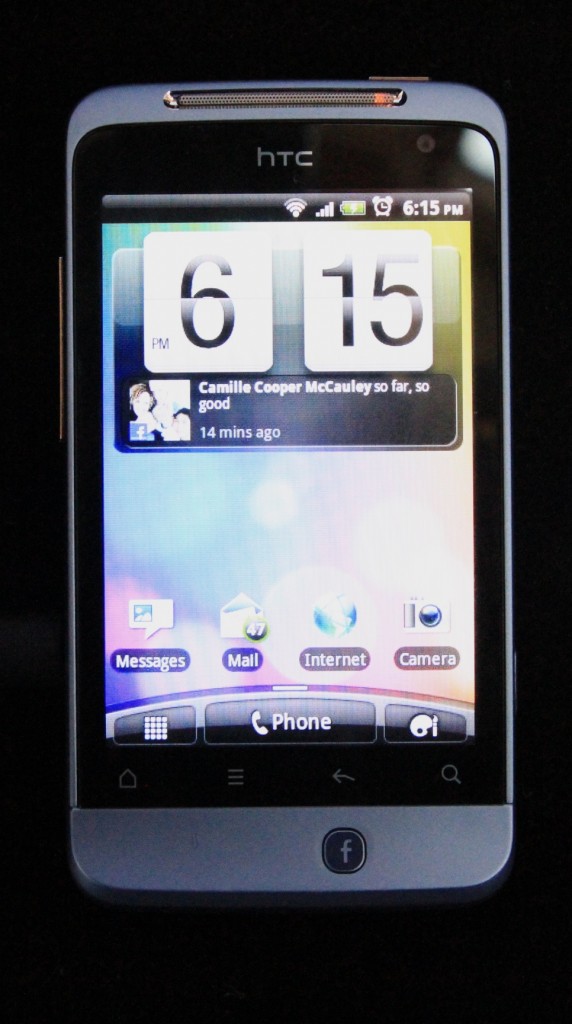 The HTC Salsa was unveiled at Mobile World Congress in Barcelona, Spain this morning, and it looks like one of two handsets that will be the closest thing we’ll be getting to a Facebook phone. At least for now. This probably quells those rumors late last year about Facebook developing its own phone, and it confirms what the social network has been saying regarding getting deeper integration in some handsets.

The Salsa has a 3.4-inch touchscreen display, so it’s roughly about the same size as the iPhone 4 screen. However, it’s sporting a 480 x 320 resolution, which is a little disappointing given the high-res displays we’re seeing on most smartphones these days. The design is unmistakably HTC-esque in both looks and layout. There is the odd placement of the Facebook button down below on the phone, and it serves as the quick-share button so that you can quickly share items with all your Facebook friends. The quick-share button will actually glow when you’re in an app or feature that allows you to share what you’re doing whether you’re listening to music, browsing the web or swiping through photos. If you press and hold it down, you can check into a location with Facebook places.

The back of the phone is a bit odd in its design and coloring and doesn’t bear the same simplicity that other HTC devices have. There is a 5MP camera with flash, and a speaker to the right side. The upper left and right quadrants of the back of the phone are colored a bit differently, and then we have the large black area at the bottom where the antennas are.

At the home screen, you can instantly tell that this is a Facebook phone. The social network is embedded and integrated within HTC’s Sense UI, so you’ll see status updates right on the homescreen’s main clock and weather widget. The Salsa will launch with Android 2.4, which will still go by the Gingerbread name, but will be more optimized to take advantage of dual-core processors, which this device won’t have. Instead, the Salsa is running a 600MHz processor, has 512MB of ROM and RAM, and supports HSPA 7.2Mbps.

If the Salsa sounds like your kinda phone, it will be available some time during Q2 2011. However, if you’re looking for all the same social networking features in a phone with a physical QWERTY keyboard, check out the HTC ChaCha.

Enjoy the hands-on photo gallery and HD video below!

For some reason Samsung hasn't used the "official press channels" to launch the Galaxy S WiFi 5.0. Rather, we've seen...