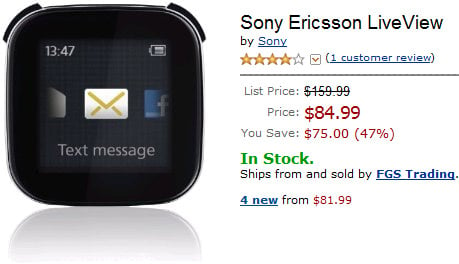 If you’ve been looking to couple your Android smartphone with another smaller screen for notifications, you may like the Sony Ericsson LiveView. Until this point it wasn’t available in the U.S. but that just changed – you can grab it for $84.99 via Amazon.com, which is kinda pricey. Then again, if you want to use it as a watch — and that’s Sony Ericsson’s idea — that doesn’t sounds too unreasonable; cause a decent watch is usually more expensive.

Once equipped with the LiveView, you will get notifications about phone calls, updates from apps like Twitter and Facebook and more. This information will be clearly visible on the accessory’s 1.3-inch PMOLED screen.

Earlier we’ve heard users with non Sony Ericsson smartphones had problems connecting with the LiveView, but that should’ve been fixed with the latest software update…

In related news, Sony Ericsson is offering the LiveView bundled with some of its phones and select apps in the UK. We don’t know whether these so called “Experience Packs” will be sold in the U.S. too.

Chinese firms like ZTE and Huawei are breaking into the mobile phone industry in a big way. They're eating margins...