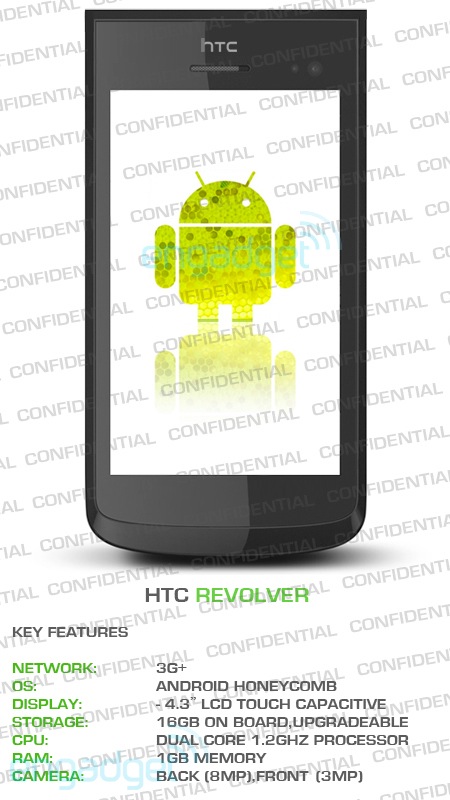 A new leak suggests that the HTC Revolver will be a flagship Android device for AT&T and this will be bringing the the Android Honeycomb operating system to smartphones … even though we’ve heard that Honeycomb won’t come to smartphones. Confused yet?

According to a leaked image over at Engadget, the HTC Revolver will be a high-end Android smartphone that sports a dual-core 1.2 GHz processor (probably a Qualcomm SnapDragon), 3G+, 4.3-inch LCD touchscreen, 16 GB of storage, an 8-megapixel rear camera, a 3-megapixel front-facing camera and it should be available on AT&T in the third quarter of AT&T. The interesting thing is that the image says the operating system will be “Android Honeycomb.”

Google has described Android Honeycomb as the version of the platform that’s optimized for tablets and it will land on devices like the Xoom, T-Mobile G Slate, Samsung Galaxy 10.1 and other devices. It features the ability to add widgets easily, integrated voice calling and it makes better use of the real estate that is on a tablet.

While digging through the Android Honeycomb emulator, we’ve seen that this version does have some support for smartphones but Google definitely could do a better job of letting hardware makers and the public know what’s to come from the little, green robot. We don’t expect it to reveal all of its cards but a little more clarity could be nice.

Google has said that the next version of the platform will finally merge the features of Android Honeycomb and Gingerbread. We believe that this version will be called Ice Cream Sandwich, as this would allow Google to build another statue that doesn’t look too much like the Froyo one.

Luckily, Google I/O conference is just around the corner and we should be hearing a lot more about what versions of its mobile platform will be coming out.

Like we don't already have enough Android customization options available from handset and mobile software makers, some carriers want to...