Nokia Plan B, an initiative to unseat CEO Elop and restore Nokia to its roots, was revealed today to be a hoax. The plan emerged earlier this week when a group of nine young Nokia investors reportedly banded together to reverse the Finnish company’s decision to replace Symbian with Windows Phone. The unnamed group crafted a plan to fire Nokia CEO Stephen Elop and get themselves elected to the board of directors. Other goals included the continuation of  Symbian for the next five years, the adoption of MeeGo as the primary smartphone platform, and the establishment of QT as the main development platform. 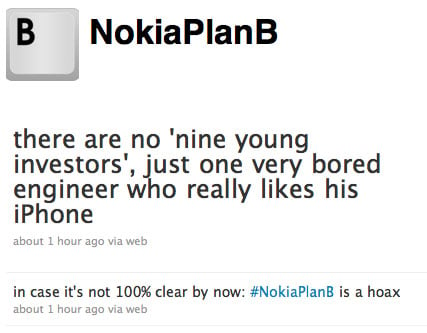 After causing a stir and a lot of media attention, the group appeared to be falling apart. Though hundreds of shareholders were reportedly backing their plan, major investors were not supportive of their endeavor. The group also lamented the amount of time it would take to bring their plan to fruition. Early Wednesday morning, the Nokia Plan B site was pulled down and of a wave of news articles suggested the group had given up on its cause. Rather than give up, the creator of this much-ballyhooed plan confirmed via Twitter that Nokia Plan B was a hoax. There were never any plan and no investors were involved.It was merely one iPhone user, bored with his or her  job as an engineer, that created this elaborate ruse. It is amazing how far people will go just for some attention, isn’t it?

Even the best of us get things wrong every once in a while and that's why you may have seen...