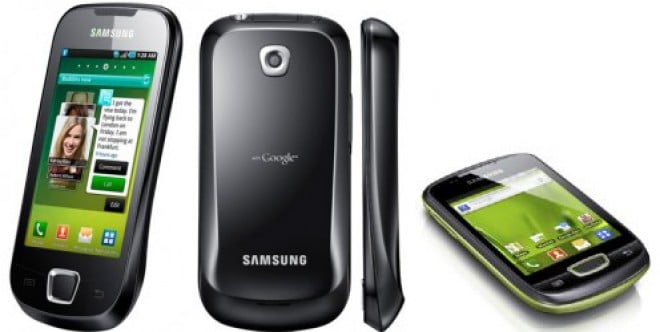 Those looking for an Android phone that don’t want to shell out the big bucks should look to the newly announced Samsung Galaxy Mini and T-Mobile Move that were just announced at Mobile World Congress. We’re hearing that both of these devices with hit the US sometime this Spring, and cost somewhere between $50 and $75 on a two-year contract.

While neither of these phones are what we’d call impressive, they do give the user somewhat-decent specifications for the price. The Samsung Galaxy Mini will ship with a 600 MHz processor, 3.2 inch display, 3G radio capable of getting 3.6 Mbps down, 3 megapixel camera, and a measly 150MB of internal storage. There’s a microSD card slot on board that can be expanded to 32GB, and since this handset runs Android 2.2, you’ll be able to push your applications to the external storage, should you run out of space.

The T-Mobile Move is even more of a budget phone than the Galaxy Mini, and is touted as the most affordable Android phone on the market. No price was released for the handset, but we’re going to assume it’ll undercut the LG Optimus lineup, which currently sits at $30 at T-Mobile. The Move sports a 2.8 inch display, 600 Mhz processor, 2 megapixel camera, 150MB of internal storage, which can be upgraded to 32GB through the microSD card slot, with a 2GB microSD card pre-installed.

The Move has one advantage over the Galaxy Mini, and that’s its support for HSPDA that will give it data speeds up to 7.2 Mbps. Also running on Android 2.2, you wouldn’t be sacrificing much in the specs department if you went with this handset instead of the Galaxy Mini. Whether or not you’re willing to sacrifice some screen real estate is the realquestion.

So what do you think about these handsets? While they may not be high-end phones in any way, they will certainly attract people who want to upgrade their feature phones without paying upwards towards $200.

Motorola CEO Sanjay Jha told Reuters that the Motorola XOOM will retail for $799 unsubsidized from Verizon. The WiFi-only version...