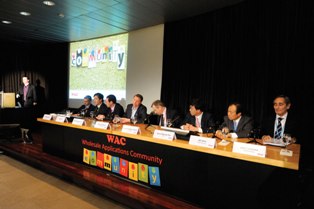 The Wholesale Applications Community aka WAC announced the new 2.0 specification, which now includes HTML5 and multimedia support. This in turn will enable better widgets and apps that mimic native apps’ capabilities. And that’s like a start, with WAC 3.0 — set to be available in September — promising to include billing support and user identification to the mix.

In the other news, 8 (yes that’s eight) major operators announced they are now connected to the WAC platform. Among the companies that are taking the “WAC advantage” there are China Mobile, MTS, Orange, Smart, Telefónica, Telenor, Verizon and Vodafone, and — according to WAC CEO Peters Suh — the goal is to add at least another 8 operators to the platform this year.

At a press conference which featured representatives from Telefónica, Vodafone, AT&T, Ericsson, Orange, KT and Samsung – Telefónica’s COO Julio Linares was proud to counter any cynicism from the attending press. He said: “There was a lot of doubt a year ago that so many different companies in the industry could move at speed. We are all moving at the right speed.”

Vodafone Europe’s CEO Michel Combes said that its app offerings are now WAC compatible in all its countries, while Telefónica’s Linares noted that the operator has started implementing WAC in Spain and plans to roll out across all its operations in future.

At the moment, there are about 12,000 apps available via WAC, which work both on feature and smart phones.

Finally, it is said that major handset makers, including LG and Samsung, will be “further driving uptake of WAC by ensuring that all devices produced by the two companies that are capable of supporting the WAC runtime will do so.”

SPB TV 3.0 is touted as a mobile TV app store for broadcasters

SPB Software announced a new version of its mobile TV solution - SPB TV 3.0, which is dubbed as an...