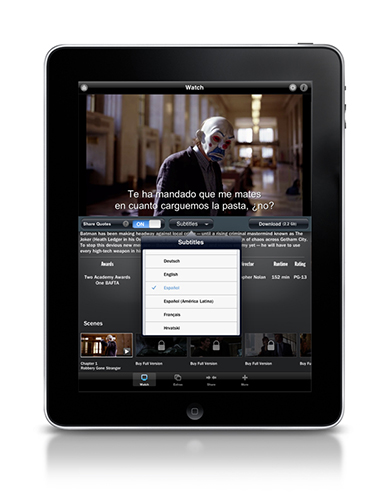 Warner Bros. announced today that the studio was releasing select editions of movies as iOS applications. The new distribution method will kick off with the release of the app editions of The Dark Knight and Inception for the iPhone, iPod touch and iPad. The movie apps will be available for free and include the first five minutes of a feature film as well as bonus content such as games, trivia and soundtrack information. If you like what you see, you can buy the full movie as an in-app purchase that lets you download the movie and stream it.

The apps will be available for free in 30 countries including China, Brazil and the Netherlands. With its international flavor, each app will feature customizable menus in 16 languages and subtitles in 34 languages. The apps are also socially aware and let you share movie quotes with friends on Facebook and Twitter as well as view a live-stream of chatter about the film that you are watching. Additional details on this novel distribution method is available on the second page.

Although Android is everywhere these days, iOS brings in more dough in terms of ad revenue for free apps. It's...