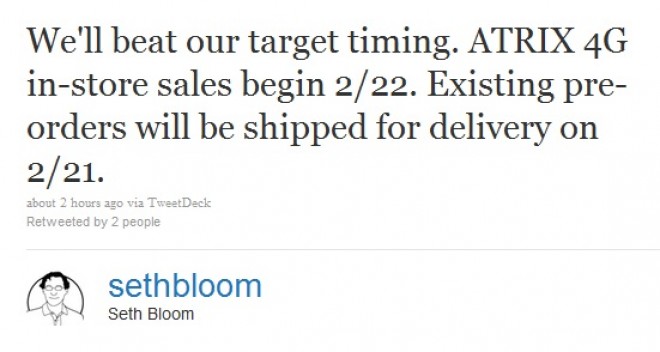 If you want to grab the Motorola Atrix 4G but you didn’t get around to pre-ordering it, you’ll have less time to wait than you may have thought. According to the tweet above, you’ll be able to walk into an AT&T store on the 22nd and grab one of the most powerful smartphones on the market.

This dual-core toting Android handset is one of the most anticipated devices of the year thus far. Motorola may not have an eye for design in the software department that we wish they did, but they usually always deliver on the hardware front. If you pre-ordered the Atrix, then you may get a shipping notification on the 21st, as that’s when the handsets should begin to ship.

The Atrix 4G has a lot of accessories available for it, but unfortunately they are pretty expensive. The laptop dock is the most intriguing, but also the most expensive, coming in at $300.  Motorola needs to check themselves in the pricing department,  as this wouldn’t be the only thing that looks overpriced. Nonetheless, the handset itself is great, and we can’t wait to get our paws on the thing again.

We’re not sure why Motorola pushed the date up for the Atrix 4G, but since dates are usually pushed back, we’ve got nothing but love for them right now.

If you didn’t get a chance to pre-order the Atrix 4G, will you be waiting at AT&T’s door come next Tuesday?