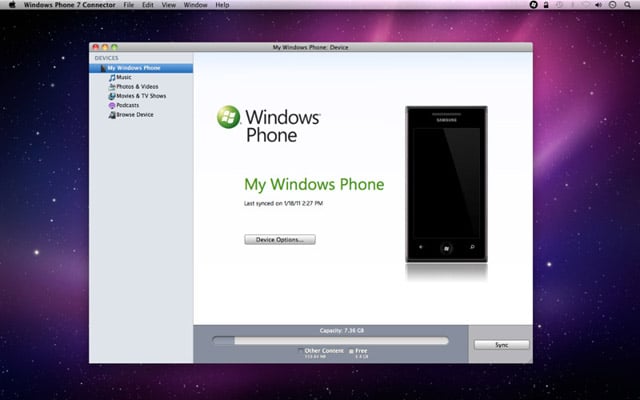 It is highly unlikely to have a Mac user owning a Windows Phone 7 device. Let’s say that happens, how would he or she connect its 1.0 smartphone to his beloved computer? I guess one could manage to sync between the two using some third-party cloud-based service or fire-up Boot Camp every now and then, but that’s everything but seamless.

Enter Windows Phone 7 Connector, a little piece of software which is made to help Windows Phone owners sync their mobile device with Macs. After releasing in beta back in October 2010, Microsoft finally polished the product and released it in the Mac App Store. Using the software you will be able to sync your media files as well as get access to the latest Windows Phone firmware updates. Moreover, once installed, Windows Phone 7 Connector will make sure you can use iTunes to move songs, podcasts, audiobooks and everything else from your Mac to the smartphone. Lovely, too bad virtually no one needs it…

Sony Ericsson won't be the only Android handset maker without a tablet for too long. According to Engadget sources, the...