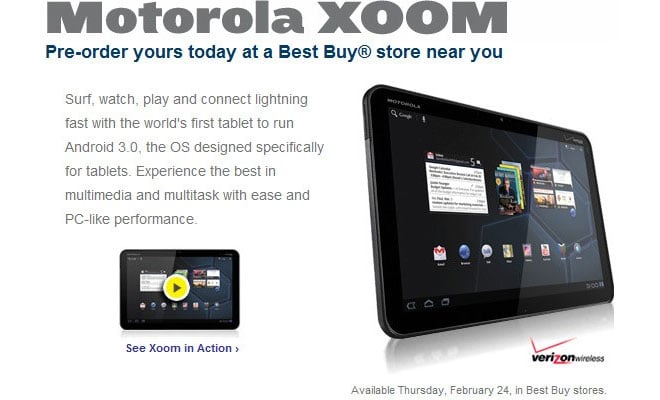 Best Buy’s pre-order page for the Motorola XOOM is live and the highly anticipated tablet is slated to debut finally on February 24th. The Android 3.0 tablet will be available for $799 and is listed along with a variety accessories such as a portfolio case ($40), a dock ($50), a wireless keyboard ($70) and a slightly expensive HD speaker dock ($130). Though the high sticker price may shock some customers, Motorola Mobility CEO Sanjay Jha points to the 3G/4G connectivity of the device which boosts the XOOM above the less expensive $729 3G+WiFi Apple iPad with 32 GB of storage.

For $800, the Motorola XOOM will deliver a 10.1-inch capacitive touchscreen display with 1280×800 resolution, a dual-core Tegra 2 processor clocked at 1 GHz, 1 GB of RAM, a five-megapixel rear-facing camera capable of HD recording, a two-megapixel front-facing camera for video calling, 1080P video playback. EV-DO rev.A connectivity, 32 GB onboard storage, microSD expansion up to 32 GB, Bluetooth 2.1+EDR, WiFi 802.11 b/g/n, aGPS/GPS with navigation, DLNA, and HDMI out. Interestingly enough, that unusual and annoying requirement that you have to buy one month of data to unlock WiFi access remains.

All this hardware horsepower will be driven by Android 3.0 Honeycomb. Honeycomb is Google’s tablet-optimized OS for its Android platform. A shown in the video below, this version of Android has several tablet-specific features such as a multi-pane email interface that enhances the user experience on a larger-display. This new mobile OS, combined with some hot hardware specs, makes the XOOM one of the top Android tablets to hit the market. If you are curious about the XOOM, you can check out our hands-on review. You may also want to swing by your local Verizon retailer as stores are reportedly receiving stock and setting up displays this weekend.

[Via Best Buy and Engadget]