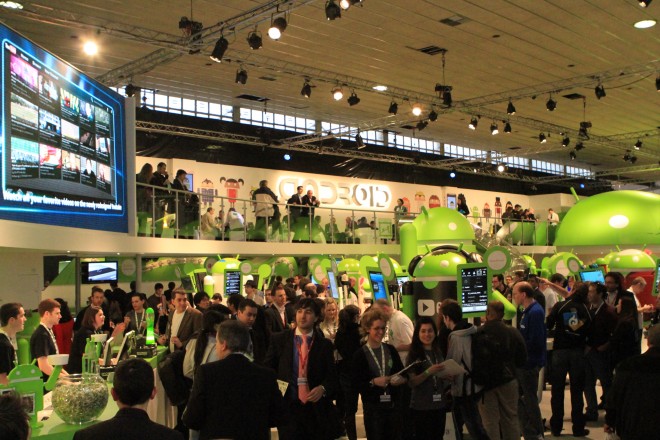 The IntoMobile army was at the Mobile World Congress 2011 show in Barcelona and you couldn’t walk five feet without bumping into Android. In only a span of a few years, Google has gone from virtually zero presence at the show to being the dominant player there and that was extremely evident at its booth.

The Google Android booth at Mobile World Congress 2011 was insane … in a good way. It was kind of tucked away in a corner but it was an oasis in the sometimes exhausting trade show.

First of all, the Google Android booth had multiple giant statues of the green robot in a variety of costumes. These could also be had in the form of an Android pin – these became the most-sought after swag of the entire show.

There was a (relatively tame) demo area which was showing off Android apps on the phone and Honeycomb apps on tablets. We’ve seen things like the Fuze Meeting for Honeycomb before but it was a good showcase for those who haven’t seen it before.

The Google Android booth at Mobile World Congress also had a conveyor belt showcasing the hundreds of products which use the little, green robot. We’re talking about things like the G1 and Galaxy Tab but also personal media players which have never seen the light of day in the United States.

Next to the conveyor belt was an awesome smoothie bar which helped me maintain my edge while fighting through the crowds. Going upstairs led you to a giant slide – where many conference goers lost their dignity – and large refrigerators filled with free water bottles and mineral water.

The Google Android booth also had a cool program which would take your picture and turn it into a robotic avatar. Our own Simon Sage did this and would up with a large, lanky Android to call his own. Check out the video below for an idea of the madness.

Forget about those buy-one-get-one free, or BOGO, deals, U.S. Cellular is one-upping carriers who offer that deal with five free...