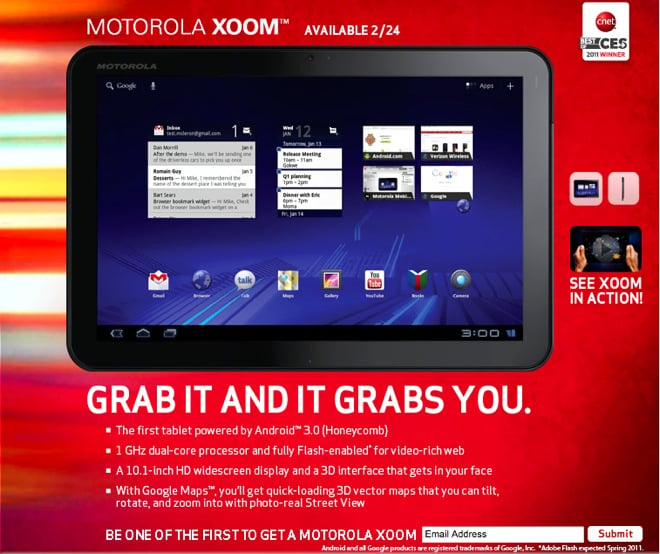 The Motorola Xoom is the tablet Android fans have been waiting for. It’s got a spec sheet that’ll knock you back off your feet and a pretty sexy design. In all, we’ve come away pretty impressed with the Android 3.0 Honeycomb tablet if you don’t count the sticker shock. For some reason, however, it seems that this mighty, do-all Android tablet is launching without Adobe Flash enabled. Instead, it’s coming in sometime this spring. Why?

Well, we don’t know why. An Engadget reader pointed out the fine print on Verizon’s Motorola Xoom page, and it reads, “Adobe Flash expected Spring 2011.”

Perhaps it’s a bigger battery and system resource drain than was expected, so updates and optimizations are coming soon. Or maybe there’s just something buggy about the way Flash plays with Android 3.0 Honeycomb and fixes are on the way for that, too. This is all speculative, of course, but it is odd that a tablet that sports killer internal hardware and the version of Android made for tablets is going to launch without Flash.

Oh well, you can certainly live without it for a few short weeks – unless, of course, Verizon intends to get Flash working on the Xoom some time late spring.

We’ve reached out to representatives for Adobe and at Verizon to see what’s causing this delay, so we’ll be sure to keep you abreast!

[Update]
As promised, we have an update here straight from Adobe’s blog:

Adobe will offer Flash Player 10.2 preinstalled on some tablets and as an OTA download on others within a few weeks of Android 3 (Honeycomb) devices becoming available, the first of which is expected to be the Motorola Xoom.

We are excited about the progress we’ve made optimizing Flash for tablets, alongside partners including Motorola, and expect our momentum to continue. As we announced last week, over 20 million smartphones were shipped or upgraded with Flash Player in 2010 and over 150,000 consumers on the Android Market are rating it 4.5 out of 5 stars. We have raised our estimates for 2011 and expect to see Flash installed on over 132 million devices by the end of this year. Consumers are clearly asking for Flash support on tablet devices and the good news is that they won’t have to wait long. We are aware of over 50 tablets that will ship in 2011 supporting a full web experience (including Flash support) and Xoom users will be among the first to enjoy this benefit.

Motorola's story throughout the years has been riveting. The firm practically invented the mobile phone, had several iconic products including...