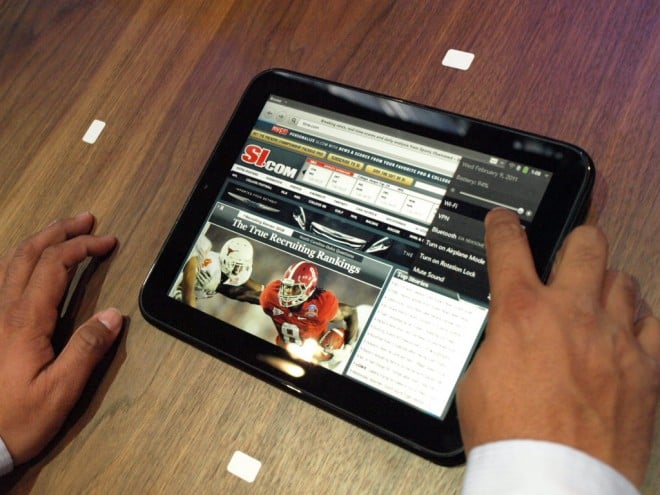 When we first got a look at the HP TouchPad webOS tablet we were excited but that was muted because we felt it could be released in about six months. A new report suggests that the webOS iPad competitor could be landing in stores as early as April.

According to the hit-or-miss DigiTimes, the company is preparing to ramp up production of the HP TouchPad webOS tablet in mid-March for an April release. The unnamed sources in the report say that the company is expecting to product four to five million of the iPad competitors.

The HP TouchPad webOS tablet looks like it will be a strong competitor as it features all the specs that uses expect. It features a 9.7-inch screen with a 1024 x 768 resolution, a 1.2 GHz Qualcomm SnapDragon processor, WiFi, Bluetooth, 16 or 32 GB of storage, microUSB charger, Beats by Dre audio system, and a 1.3-megapixel front-facing camera.

Probably the most interesting thing about the TouchPad is the webOS operating system, as we’ve always felt that the Palm platform would be perfectly suited for the larger form factor. As you would expect from devices like the Pre, apps launch in cards and you can stack these together to group similar apps. Unlike with the phones, the tablet won’t have the gesture area as you hit a physical home button to get back to the home screen instead of swiping up from the bezel.

Pricing and availability will be very important for the success of the HP TouchPad webOS tablet, as it will be facing a crowded field. The Motorola Xoom is just days away from hitting the market and it will be the first of many Android 3.0 Honeycomb devices that hit the market.

We’re also expecting Apple to introduce the iPad 2 in the not-too-distant future and we wouldn’t be surprised to see the sequel to the iPad land in April. Check out our hand’s on video of the TouchPad to help you know what to expect.

The RIM-owned company QNX has tweaked out a 2009 Corvette which lets the BlackBerry PlayBook change the car's internal temperature...