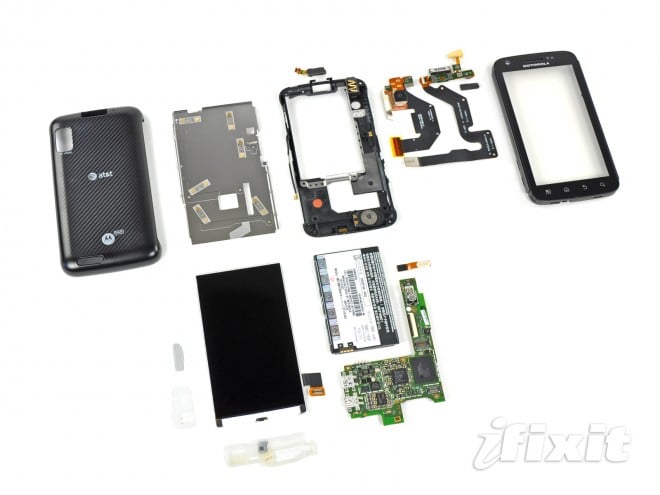 The Motorola Atrix 4G became available to the general public today and it’s already been torn to bits by the folks at iFixit. The innards reveal no surprises as we already knew what this Android device would be packing: an NVIDIA Tegra 2 dual-core processor, 8-core GeForce GPU, 16GB of on-board memory and 1GB of RAM. Additionally, the has a 5MP rear-facing camera capable of 720p HD video capture and a VGA front-facing camera for video chats and self-portraits.

While iFixit has torn down hundreds of devices, they tell us that the Motorola Atrix 4G is one of the easiest to take apart and repair. There are no proprietary screws, the battery is easy to replace and the LCD panel isn’t fused or glued to the glass screen. The folks over at iFixit also tell us that the Atrix 4G is near-perfect when it comes to being today’s Android king, but two critical items are holding it back: Motoblur and that pesky bootloader that has been locked down, which means no custom ROMs.

Overall, in terms of ease-of-repair, the iFixit folks give this a 9 out of 10 rating, which is basically as easy as it’s going to get when it comes to fixing smartphones.

For a detailed layout of the teardown and repair, see the link below.

Android 2.3.3 update rolling out to Google Nexus One and Nexus S

Good news for Google Nexus One and Nexus S owners, the highly anticipated Android 2.3.3 update is finally rolling out...