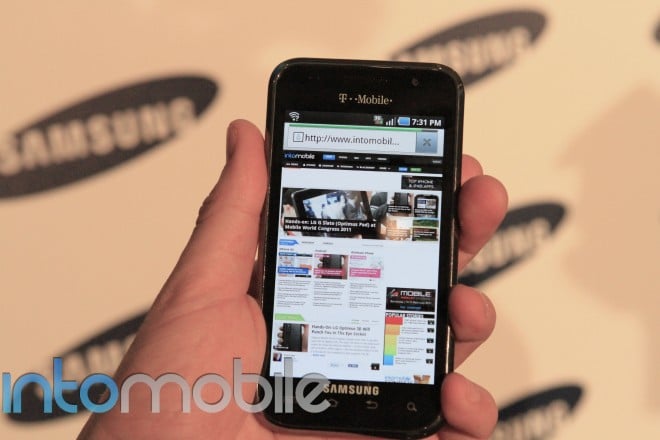 Just wanted to give you a quick reminder: the Samsung Galaxy S 4G will be landing on T-Mobile tomorrow (Feb. 23) for $199 on a new contract and after a rebate.

We had previously thought that the Samsung Galaxy S 4G would land for about $149 after rebates and taxes but that won’t be the case. If you look at the total cost of ownership after two years, that $50 doesn’t really amount to much anyways.

So, what’s new with this phone over the T-Mobile Vibrant? Well, this Android handset will have access to the carrier’s HSPA+ 4G network for up to 21 Mbps download speeds in available markets. It will also come preloaded with Android 2.2 Froyo and the TouchWiz user interface.

Other than that, the Samsung Galaxy S 4G isn’t much different than the T-Mobile phone that preceded it. It still sports the same 4-inch Super AMOLED display (quite nice, too), a 1 GHz Hummingbird processor, a 5-megapixel camera with no flash that can record video. There’s also a somewhat-shimmering multchromatic back to the new phone and it looks pretty darn good in the hand.

The company will continue to load this with premium content, as the Galaxy S 4G will come loaded with the Inception movie. I’m a big fan of the Super AMOLED display but I still don’t think this type of movie should be viewed on a small screen – just go ahead and wait until you’re in front of a television, I say.

So, that’s about it in terms of differences and I can’t really recommend this when we all know that the S 2 will be hitting the states in a matter of months. Sure, you may have to wait until November or so to get your hands on it the United States but the dual-core processor, enhanced screen and the new TouchWiz should make it worth the wait.

Check out our video below and let us know if any of you are going to take the plunge.

We're certainly not surprised about this one, but the Atrix 4G has a locked bootloader, courtesy of Motorola. To the...