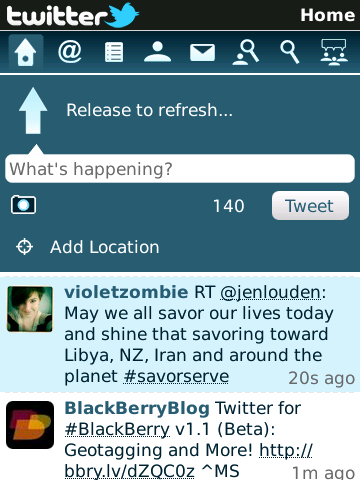 Twitter for BlackBerry has been updated in the Beta Zone to 1.1, enabling a host of new features to the RIM-built social networking app. The biggest feature is one I’ve been waiting for since the official app first came out – geotagging support. Now your tweets can have your location included, unless that’s just a little too creepy for you, that is.

On top of that, @ mentions are now pushed to your device just as quickly as direct messages, which is a huge addition. Direct Messages are now threaded, so you don’t have to scratch your head trying to remember how a conversation went, and similarly, “official” retweets include a “retweeted by” caption to explain why unfamiliar faces might show up in your stream. There are now autocomplete suggestions for hashtags based on what you had used before, and the Social Feeds app can now handle a few more things on its own without having to launch into the dedicated Twitter client. Finally, there’s a nice gesture support for touch devices, where you can refresh your timeline just by pulling the stream down as far as it will go, like you may have seen in other client. As is, Twitter for BlackBerry already plays nice with left and right gestures and in the Messages app, when flipping through e-mails.

As usual, Twitter for BlackBerry still has tight integration with the native address book, support for organized lists (a must if you follow a lot of people), saved searches to keep up-to-date on your favourite topics, and of course the usual replying, tweeting, and messaging that Twitter’s all about.

At this point, the only other feature I could imagine wanting is multiple account support, for the heavy-duty social networkers, but that’s not really a dealbreaker for me one way or the other. To get downloading, head over to the Beta Zone.

Android app helps man get out of a speeding ticket

This is a bit of a stretch, but an Android application might have helped a man get out of a...