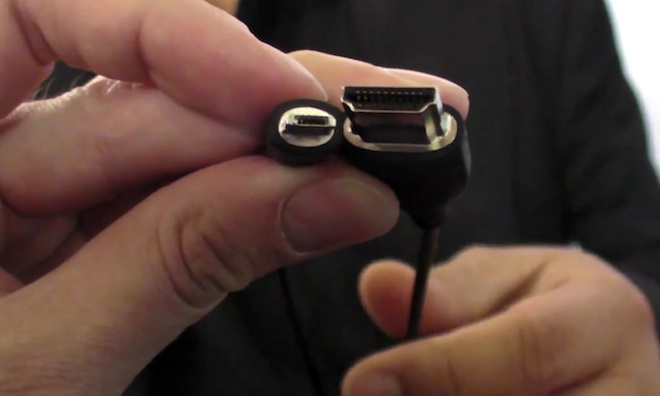 At Mobile World Congress Samsung announced the Galaxy S II and we thought we caught all the important details that you guys would care about. The 4.3 inch Super AMOLED Plus screen, the dual core processor, the 8 megapixel camera, you know, that sort of stuff, but one little thing slipped past our radar: it also supports mobile high-definition video link (MHL for short). Instead of handset vendors having to shove a microUSB and microHDMI port on their devices, ruining the smooth lines and making the design process all the more tricky, MHL lets you output HD video via plain old HDMI. You’ll need a special cable of course, male microUSB to male HDMI, but it’s not going to be long until those are made in such abundance that they’ll be cheaper than a bottle of beer. There is a catch however. MHL doesn’t do power with today’s TVs, so if you’re going to be streaming video off you smartphone then you better hope that the film you’re watching ends before your battery dies. It’s a small price to pay, we think, because ports are ugly. Future TVs with MHL support will be able to charge devices.

The MHL standard was first demoed in 2008 and hit 1.0 in June 2010, so it’s a bit surprising that it’s taken this much time for it to end up in final consumer hardware. The folks behind the standard say that there will be about half a dozen phones and at least 1 tablet shipping this summer with MHL support, and that eventually it’ll become a common feature. We’d rather have wireless HDMI, but the amount of competing standards that offer that, plus the whole having to invest in a new television set or an adapter that you have to hook up to your TV, is a bit daunting. Then for the geeky crowd there’s DLNA, which takes video from your device and streams it over WiFi to your TV where all the decoding is done there. That’s attractive, but a pain in the ass to configure.

Millions of man hours worth of research had to be conducted in order to enable the technology that makes that...